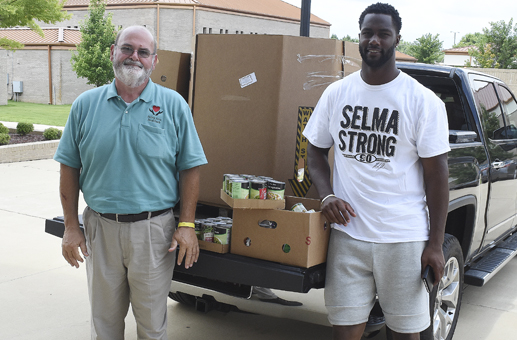 Jeff Harrison of the Selma Area Food Bank poses for a photo with NFL defensive end Michael Johnson at Johnson’s Family Fun Day Saturday at Wallace Community College. Admission to the event was a perishable food item. For more see sports on page 8A. –Daniel Evans

Jacobie Reese ran up an inflatable Saturday and slid down, into a pool of ice cold water.

“I’m going to go again,” Reese yelled with a smile as he climbed his way back to the top.

It was that kind of day for area youth Saturday at Michael Johnson’s Family Fun Day at Wallace Community College Selma. Like in years past, the Selma native’s 93-90 Foundation set up plenty of activities for area children to do — inflatables, a toothpaste toss and a train ride were all part of the fun.

“It gives them an opportunity to have some fun, kick back and mingle with different people,” said Johnson, who plays defensive end for the NFL’s Cincinnati Bengals. “The admission is just a non-perishable can good so it let’s them know it’s cool to give back and something as simple as that adds up.”

All the can goods were given to the Selma Area Food Bank and about halfway through Saturday’s festival, dozens of items had already been collected.

“It’s gratifying to think he’s willing to come to Selma as much as he does and support the food bank as much as he does,” Jeff Harrison, executive director of the Selma Area Food Bank, said of Johnson. “He and his family are very big supporters of ours.”

“In turn, they take it and it just multiplies out,” Harrison said. “Each agency we serve will have an effect in a month’s time on 1500 to 2500 families easily and that’s just one out of 48.”

Johnson and his foundation weren’t the only ones giving back Saturday. Hardees provided a meal, Kona Ice’s truck gave out free frozen treats and Sarrell Dental sponsored several activities.

Johnson said around 50 volunteers either helped Saturday or took part in planning the event.

“I have a great team of people that help me out with everything,” Johnson said. “They meet throughout the year to come up with ideas to come up with ways we can better serve the community.”

It’s been a busy couple of weeks for Johnson.

A few weeks ago Johnson sponsored a group of 21 local high school football players on a college tour to Clemson and Georgia Tech, his alma mater. The students were from all seven high schools within Dallas County. It was the second straight year Johnson had funded the trip, but it wasn’t just about football.

They went to the Atlanta aquarium, the Dr. Martin Luther King Museum and other places of historic significance.

“It was a history lesson as well,” Johnson said.

Johnson and the Cincinnati Bengals will report to training camp July 29.  He said he’s on a new diet and feeling as good as ever going into next season.