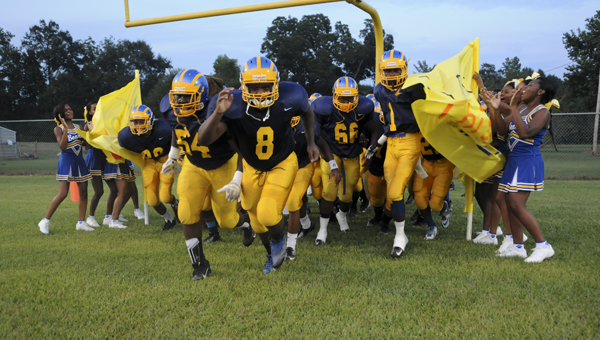 The Keith Bears take the field for a game last season. Keith will renew rivalries against R.C. Hatch, Francis Marion and Central Hayneville this upcoming season. Keith used to play all three teams on a regular basis, but has not played any of the three during the last two seasons. –File Photo

EDITOR’S NOTE: This is the second story in a series of football schedules previews for the seven teams from around Selma and Dallas County.

Keith may not play many of its Dallas County rivals this upcoming football season, but the Bears have added several traditional rivals to their schedule.

Unlike in recent years, Keith won’t play Ellwood Christian or Selma this year, but that doesn’t mean there aren’t rivals on the schedule. Although they haven’t played in recent years, R.C. Hatch, Francis Marion and Central Hayneville all have longstanding series with the Bears.

“I think people are going to come out and watch us play against a Francis, a R.C. Hatch, against a Central Hayneville, against Calhoun and I think it’s just good for the community,” said Keith coach Harry Crum. “It’s something we look forward to.”

Coming off a 4-7 season, Keith is moving up to class 2A this season, meaning the Bears’ entire schedule looks different this year.

Keith will open its season against Winterboro in Orrville on Aug. 19. The Bulldogs went 6-4 last season but missed the playoffs in class 1A.

Crum said he used last year’s Ellwood-Winterboro game to get ready for the Eagles last season, so he’s seen some tape on Winterboro, even though it’ll be dated by the time the teams play this year.

Following, Winterboro, the Bears will take on Calhoun on Aug. 26. The Bulldogs went 0-10 last season and have lost 19 of their last 20 games going into this season.

Crum said no matter what the record says, the Bears won’t be taking anyone lightly this year.

“I know they had a hard season last year but we don’t underestimate anybody. I know usually they are very athletic,” Crum said.

Following the game with Calhoun, the Bears will move into class 2A, region 4 play with games against Aliceville and Billingsley. Both teams made the playoffs last season.

Crum said Keith’s games with Billingsley in the past have always been hard hitting. The teams haven’t played since 2013.

“That’s one we look forward to because if you can beat Billingsley, you probably have a pretty good football team,” Crum said.

The Aliceville game is Sept. 2 in Orrville and Billingsley is on the road Sept. 9.

After a Keith bye week, Southside will travel to Orrville on Sept. 23 in a game between Dallas County rivals. In recent years, the Keith-Southside game has become one of the most anticipated in the county, due to its close finishes. Crum said something weird always happens when the teams get together.

Last year Southside won the game in overtime after it was delayed a night due to lightning.

“The endings of the games haven’t been real fun for us but the games are real competitive and high scoring and always full of drama, whether it’s a rain out, the lights or lightning or whatever,” Crum said. “It seems like it’s always packed with some kind of unknown.”

Following the game with Southside, Keith plays home games against Francis Marion (Sept. 30) and R.C. Hatch (Oct. 14) and road games against Verbena (Oct. 7) and Thorsby (Oct 21). All four are region games that could determine the playoff picture in class 2A, region 4.

Crum said Keith has never lost a game to R.C. Hatch in school history. Both Hatch, who went 3-7, and Francis Marion, 4-7, had losing records last year.

Verbena went 8-4 last season, which is the best record of any Keith opponent, and Thorsby went 6-5. Both teams figure to provide difficult road tests for the Bears.

“There is only going to be four slots so only four teams can go to the playoffs and I’m hoping we can get one of those slots,” Crum said. “I think we’ve got a chance to have a decent season.”

The Bears wrap up their regular season with a non-region contest at home against Central Hayneville on Oct. 28.