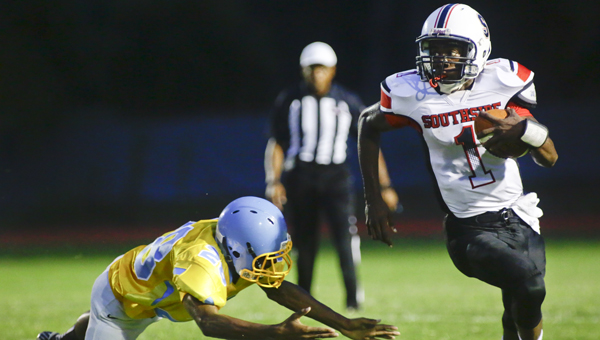 Southside’s DeQuan Johnson races down the sideline during last season’s game against rival Selma at Memorial Stadium. The teams will open the season against one another on Aug. 26. The Panthers will also play a jamboree game against Dallas County on Aug. 19. –File Photo

EDITOR’S NOTE: This is the first in a series of football schedules previews for the seven teams from around Selma and Dallas County.

Southside High School’s football schedule is full of new teams this year, but the Panthers will start by trying to get past an old rival for the first time in a dozen years.

The annual Selma-Southside football game is exactly seven weeks away on Friday, but it’s been one-sided in recent years.  Many fans refer to the annual game as a rivalry, but Southside head coach Daniel Flowers refuses to use that word.

“It’s not a rivalry until we start winning,” Flowers said. “It’s just a game right now. A rivalry is when both teams win.”

Selma has won 11 straight games in the series going into this season’s meeting on Aug. 26. That game will be the first regular season game of the year for both teams, although Southside will actually open its season the week before with a jamboree against Dallas County at Memorial Stadium.

The Panthers moved from 4A to class 3A in the Alabama High School Athletic Association’s realignment for the 2016-2018 school years, so Southside plays a different schedule than in past years.

Following the opening game versus Selma, the Panthers will play three straight contests against class 3A, region 3 competition. Southside will host Prattville Christian on Sept. 2, travel to Beulah for a road game Sept. 9 and play Pike County at home Sept. 16.

Flowers knows it’ll be a crucial stretch for the Panthers’ season.

“I let the kids know Selma High is a fun game for you, it’s a game for family and friends,” Flowers said. “But I tell them the games that are going to get you to the playoffs are those next three games.”

Winning two out of three — or all of them — could be a reasonable goal for the Panthers. Prattville Christian went 3-7 last year, Beulah was 1-9 and Flowers said Pike County, despite last season’s 8-2 record, lost a lot of seniors.

“I feel like those three games are key to our season,” Flowers said. “If we can sweep them or go 2-1, it’ll pay big dividends.”

The schedule continues in week five with a showdown with area rival Keith in Orrville on Sept. 23. Last year the Panthers defeated Keith 38-32 in overtime in a game that lasted two days, thanks to severe weather.  Keith went 4-7 and made the playoffs in 1A last season, but is transitioning to 2A this year.

“That’s going to be another good one there,” Flowers said.

Weeks six, seven and nine are also region games for the Panthers. Southside will celebrate homecoming Sept. 30 against B.B. Comer, a team that went 4-6 in 2015.  The week seven matchup against Montgomery Academy on Oct. 7 — another home game — is one that Flowers knows will truly test his team. Montgomery Academy went 9-1 in the regular season last year before losing in the first round of the playoffs to Hillcrest Evergreen.

In week eight, the Panthers step out of region play for an Oct. 14 matchup with Central Hayneville, a team that went 1-9 last season and didn’t score in four games.

On Oct. 21, Southside will play Central Coosa in the Panthers’ final region game of the year. Coosa reached the playoffs in last season’s 5-6 year, but lost to T.R. Miller in the first round.

Flowers said Southside is the biggest unknown in class 3A, region 3 and he thinks that’ll be an advantage for his team, which hopes to get back in the playoffs for the first time since 2005.

“We are the team that everybody is worried about,” Flowers said. “They see the numbers we put up last year and we are finally going to be matched up with teams with the same number [of players] as us.”

Southside will finish its regular season by hosting Ellwood Christian on Oct. 27. It’ll mark the first time the schools have ever played in a regular season game. Ellwood finished 3-7 last season after losing its last seven games of the year.