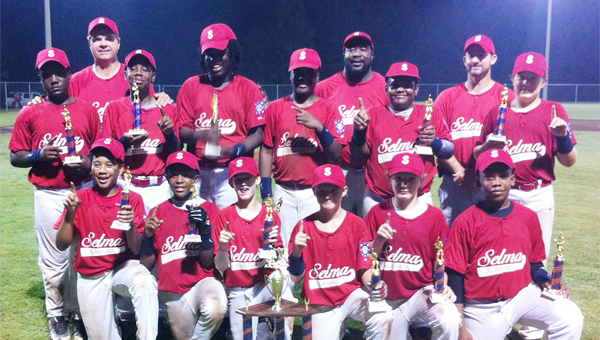 The Selma 11-12 all-stars won the District tournament by over-powering Grove Hill, 8-2 and 13-1, and will play in the state tournament in Enterprise beginning July 16.

“They played super baseball. I couldn’t be more proud of what they’ve accomplished. All of Selma should be proud of the way these boys hustle and compete. It has been fun to watch.”

In the first game of the doubleheader, Selma pitcher Matthew Hand set the tone early by retiring 10 of the first 12 batters and watching the defense make play after play behind him.

“We caught almost everything they hit,” Hand said.

“Our defense was great. And, Matthew was really dialed in for us. He probably pitched the best game of his life.”

In the second game, the pitching was also outstanding as Josh Brown and Feister combined to pitch a no-hitter in a 13-1 win that was stopped after four innings due to the 10-run mercy rule.

Both pitchers were presented game balls afterwards, prior to the team trophy presentation.

Selma exploded in the second game with 10 hits and every Selma player scored at least one run.

Kemari Eaton scored Selma’s first run in the second inning and the visiting team added 12-runs in the third inning to blow the game open.

JaMicheal Goings contributed with a hit and a run, Aaron Strong walked twice and scored and Kenneth Dukes had two hits on the night for the district champs.

Through the sub-district and district tournaments, the Selma 11-12 All Stars have a record of 8-0 and have outscored their opponents, 124-15.

“What an overall team effort,” Hand said. “We can’t wait for the state. We’ll take a few days off to celebrate this championship. But, I know the guys will be anxious to get back to work and go to the state and represent Selma in the best manner possible.”