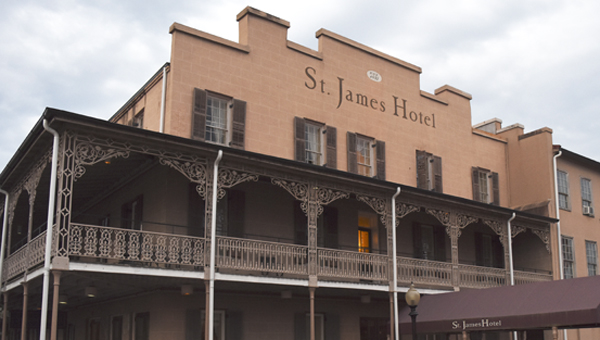 The Selma City Council will meet Wednesday to discuss listing the St. James Hotel with a national realtor. The discussion will occur just days after Selma native and businessman Mark Peterson told the council he was no longer interested in buying the hotel. –Daniel Evans

The Selma City Council will meet Wednesday to discuss listing the St. James Hotel with a national realtor.

The meeting comes after Selma native and Atlanta businessman Mark Peterson told the council that he is no longer interested in buying the hotel.

Councilwoman Susan Keith hopes to list the historic hotel with a company that specializes in selling hotel properties.

“My recommendation at this point is we want a flagship hotel here. We want someone to sell this hotel that sells flagship hotels. That’s what we are looking for,” Keith said.

Councilman Greg Bjelke suggested the council list the property with Rusty Palmer, a Selma native who has worked with other commercial properties in New Orleans and Texas.

“I certainly wish the committee would lean that way. He certainly has our best interest at heart. I would recommend that he is seriously considered,” Bjelke said.

Keith reiterated the city should choose a realtor who has experience selling hotels.

Councilman Cecil Williamson expressed disappointment that finding a realtor would carry over to another council meeting. At its last meeting, the council voted to list the property if Peterson backed away from the deal.

“I’m disappointed about that because it’s costing us $25,000 a month to keep it open. Now, this is going over two weeks, maybe four weeks before we list the hotel.”

Williamson made a motion to close the hotel at the end of June, which died from lack of a second.

Williamson made the same motion at the first meeting this month, which met an identical fate.

Keith said she realizes something needs to be done to cut expenses but doesn’t want to see the hotel close.

“I’m not for totally closing the hotel. I think one of the things we need to talk about is how we can scale back,” Keith said. “I don’t see how we can continue running it at full mast, at full staff.”

Keeping the St. James running has cost the city $200,000 since the new budget year began Oct. 1, according to Williamson.

Keith and Councilwoman Angela Benjamin asked City Treasurer Ronita Wade for revenue and expenses for the past two months.

Benjamin said the hotel has been busy and booked this summer.

“Every time I go around there, there is one event or another,” Benjamin said.

The council also discussed potential money owed to Peterson for improvements. Wade said Peterson had been paid for everything he invoiced, which totaled a little more than $3,000.

Ahead of this year’s Jubilee, the council approved Peterson spending up to $20,000 to replace air conditioning, windows and make other repairs. It’s not clear if those repairs were ever made.

A council committee working on the St. James has a conference call set for Wednesday afternoon with the company that conducted last month’s appraisal.

Peterson and the city had been in negotiations since October about a possible sale.

In backing away from the deal this week, Peterson said he disagreed with the city’s appraisal that put the hotel’s value at $900,000. He estimated it’s worth closer to $780,000.

Either way, Peterson said if he put that much money into the hotel he wouldn’t have sufficient funds to bring it up to par.

The appraisal company, Hotel Appraisers and Advisors, LLC, out of Chicago, said the St. James needs $6 million in renovations.