Sansom wins Bud Burns for third year in a row 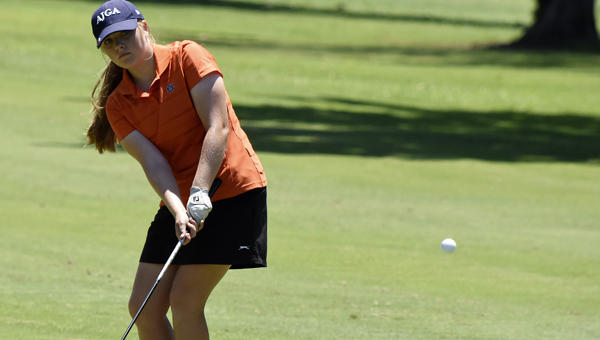 There’s something Brooke Sansom loves about the golf course at the Selma Country Club. Apparently, it likes her too.

Sansom, from Pike Road, won her third consecutive Bud Burns Dixie Junior Championship on Tuesday at the Selma Country Club by eight shots over second place Alyssa Burnett. She made six birdies in the final round, including back-to-back birdies to close out her day on holes 17 and 18.

Sansom shot a 71 during both rounds of the tournament.

“You really have to understand the course to do well on it. It’s easy to say that the course just loves me and I love the course back,” Sansom said with a laugh. “I think that’s why it’s been so good to me.”

Sansom committed to Auburn University before her freshman year of high school and has had a successful run in junior golf. However, she’d never won a tournament three times in a row.

Last week at Willow Point, she lost in a playoff on her quest to win that tournament for the third straight year. This week she got a little redemption.

Sansom credited her success to a hot putter, which allowed her to make nine birdies in the tournament.

Burnett didn’t get off to a great start in her second round, but she bounced back in a big way. She bogeyed the first and second holes and double bogeyed the third hole.

Not to be deterred, she made six birdies in the final 10 holes to shoot a final round 73, which was good enough to beat third place Hannah Pope by three shots.

“I hit the ball a lot straighter and more solid today,” Burnett said.

Pope finished third after a third round 78.  She didn’t make a single birdie throughout the tournament, but stayed steady with a bunch of pars and only six final round bogeys.

“I couldn’t get anything going,” Pope said. “It was just kind of a flat round.”