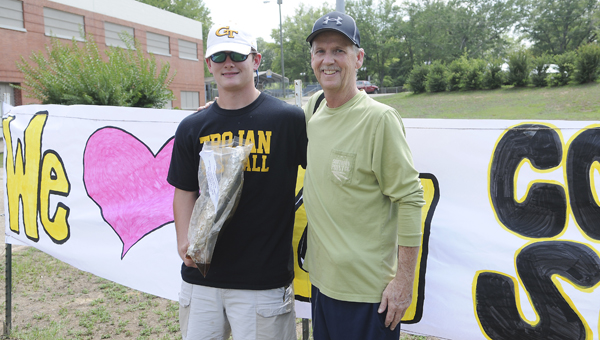 Trucks and cars were coming and going throughout the day at Memorial Stadium Friday in support of one man fighting a battle against cancer.

Meadowview coach Scott Gunter was diagnosed with colon cancer earlier this year, and the Meadowview Christian community came together to support their long-time friend by hosting a “That’s My Coach” benefit, selling ribs and Boston butts from The Shack in Marion.

“We just wanted to help Coach Scott out because he’s not just a coach, but like a father figure to us and we’re willing to do whatever we could to help him out in his time of need,” said rising Meadowivew junior Mason Kendrick.

Kendrick and his mother Traci Kendrick helped create and promote the fundraiser in an effort to lower Gunter’s medical and travel expenses as he fights his battle with cancer. More than 200 tickets were sold and over $2,500 was raised for Gunter, who is an assistant football and girls basketball coach and head baseball coach at Meadowview.

When Gunter saw all that people in the Meadowview community had done to raise money for him, he said it gave him a desire to push even harder to beat cancer.

“It makes you want to fight and get better,” Gunter said.

“I want to hurry up, so I can get back on the field with them in baseball, football and basketball. It makes me want to fight harder to get back and healthy.”

Gunter said he is feeling good, but still has eight more treatments left before the determination is made if he needs surgery. He said he is thankful to both the Kendrick family and the Britt family for all that they have done to support him through his battle.

Gunter is especially grateful for Mason, who he has coached since the third grade.

“For him to do this, it was just a blessing,” Gunter said as he fought back tears. “I can’t say enough about Mason and how good of a guy he is.”

Lebo Jones was also there volunteering Friday to help out a friend who is by his side year-round.

Jones and Gunter coach football, girls’ basketball and baseball together, and Jones said Gunter is someone he can always depend on if he needs him.

“He’s been my assistant some and I’ve been his assistant some, so we’ve just worked together and it’s been a great relationship,” Gunter said.

The amount of people who bought tickets to support Gunter exceeded Traci’s expectations — she had originally only printed 100 — but it wasn’t a surprise for those who have been a part of the Meadowview Christian community for a while.

Jones said Meadowview is a family, and when one person is hurting or in need, everyone comes to support that person.

“It’s just a blessing to me to have people who really care,” Gunter said.