Keeping cool as temps heat up 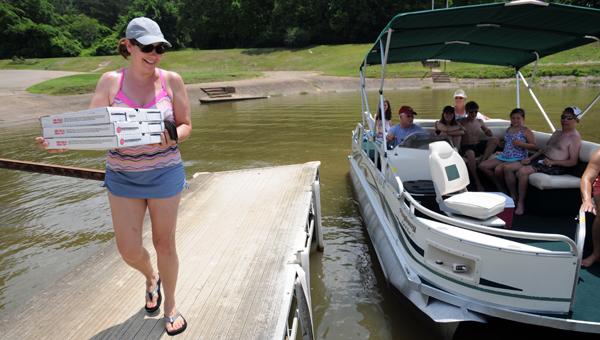 The Vines family had pizza delivered to their boat before heading back to enjoy a day on the river on Thursday, June 16.

People are advised to take extra precaution to avoid heat-related illnesses in regards to rising temperatures this week.

The Alabama Department of Public Health (ADPH) cautions residents of heat stroke, or sunstroke, in response to predicted temperatures.

“Heat stroke is a life-threatening emergency,” said Dr. Jim McVay, director of the Bureau of Health Promotion and Chronic Disease, in a press release.

According to the 10-day forecast on weather.com, temperatures in the Queen City are expected to range anywhere from 88 degrees to as high of 96 degrees during the day.

According to the ADPH, heat stroke is the most serious heat-related illness and is the result the body unable to regulate its temperature. Death or permanent disability is potential consequences of untreated heat stroke.

A majority, 37 percent, of heat-related illnesses reported is of people between the ages 25 and 44.

If heat stroke symptoms are suspected, people are advised call 911 and to move the person to a shady area and to cool them in cold water. If emergency medical personnel are delayed, contact a hospital emergency room for further instruction.

According to the ADPH, people with heart problems, poor circulation, diabetes, obesity or who have previously experienced a stroke are at greater risk of becoming sick in hot weather.

Other heat-related illnesses include heat exhaustion, a milder form of heat stroke, and heat cramps.