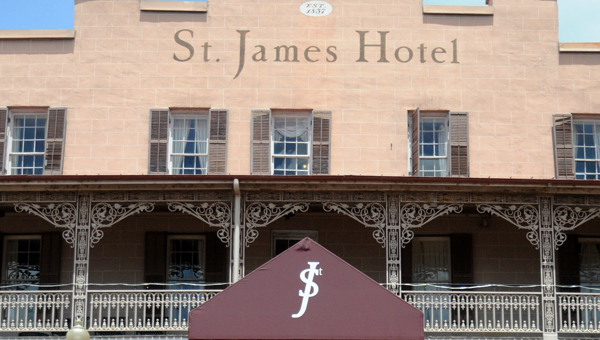 The Selma City Council voted Tuesday to give Mark Peterson two weeks to decide if he wants to buy the St. James Hotel. If not, the council will list the historic property with a national realtor.

A recent appraisal estimated the St. James was worth $900,000 but would need about $6 million in renovations and expansions to become a flagship hotel. Hotel Appraisers and Advisors, LLC out of Chicago conducted the appraisal in May.

The council received the appraisal the last week of May and had a committee meeting Monday to discuss how to proceed before Tuesday’s council meeting.

The city and Peterson have been negotiating a possible sale of the hotel since October. A potential sale price of $1.2 million had been bantered around, but Peterson said he would only consider paying that if the hotel appraised within 95 percent of that amount.

Amid the negotiations, Peterson started managing the St. James’ day-to-day operations in December at no cost to the city, but he stepped away from those responsibilities May 9.

In March, Peterson asked the city to approve a letter of intent that included a clause that he would be paid management fees similar to what previous managers made until the sale closed. The last company to manage the hotel, Strand Management, made about $4,800 per month.

At the time, several council members balked at the idea of paying more money to anyone to manage the hotel.

Peterson offered to have the management fees deducted from the eventual purchase price of the hotel. However, should the council approve the letter of intent and the sale not close, it’s not clear if the city would still owe Peterson those fees.

Peterson has already put approximately $22,000 of his own money into improving the hotel, a fact Council President Corey Bowie brought up Tuesday.

City employees have been overseeing the hotel since May 10. The council tabled accepting Peterson’s resignation April 26 and never voted on his letter of intent, which he cited in his resignation letter.

Councilman Cecil Williamson made a motion Tuesday to close the hotel as of June 30, but no council member would second the idea.

“It’s costing us a fortune to keep this open,” Williamson said. “We need to sell this thing or close it.”

Instead, the city voted to give Peterson until the next council meeting to make a decision or list the property with a realtor.

“We don’t need to be doing this. This isn’t our job. Let the realtor handle it,” said Councilman Greg Bjelke.

Several council members felt Peterson should be given the right to first refusal, but Williamson asked to see in writing where that right had been given to him.

During Monday’s committee meeting, Councilwoman Susan Keith said no contract had been signed between the city and Peterson.

While several companies, including the Auburn Hotel and Conference Center, expressed an interest in the hotel over the last months of 2015, Peterson was the only one to ever make a formal offer. Keith received an email Tuesday from someone with Wyndham Hotels who wanted to learn more about the property.

Keith said she is less concerned about the final selling price than the future direction of the hotel.

“The hotel is not just the building. The hotel is really the key to the face of Selma and Water Avenue,” Keith said. “What’s going to happen after the sale is important … I would be willing to take less money with a contractual agreement they do certain things.”

Williamson said unless somebody paid cash he didn’t see how the city could sell the property for any more than the appraised amount.

“I don’t see how you can sell it for more than $900,000. I don’t think a bank will lend more than what it’s appraised for,” Williamson said.

Efforts to reach Peterson for comment Wednesday where unsuccessful, but he did copy the Times-Journal on an email sent to Mayor George Evans and Selma City Council members.

“I am completely confused by the motion and the deadline,” Peterson wrote. “If the city wishes to truly proceed forward, the next logical step is to finalize and execute the (letter of intent).”