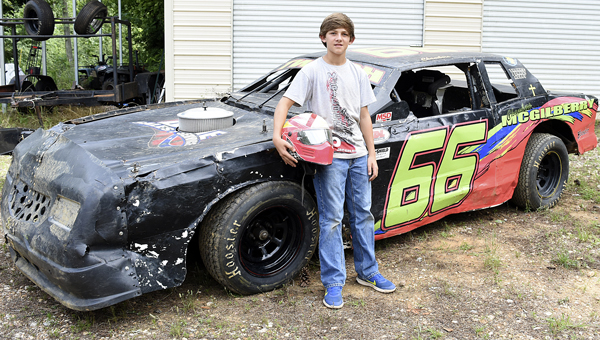 Chambers McGilberry, 13, plays every sport there is to offer at Meadowview Christian School, but where he excels most is behind the wheel of a race car. — Daniel Evans

As Chambers McGilberry prepared for the first stock car race of his life, many of his competitors stopped by to wish him good luck and to offer advice.

It’s easy to see why they might’ve underestimated the 13 year old, who was racing against a field that consisted of mostly seasoned adult racers. As it turns out, McGilberry probably should’ve been the one giving pre-race pointers.

He finished second that night in April at WhyNot Motorsports Park in Meridian, Mississippi, and was just a few car lengths from pulling out a win in his first race.

“For a second I thought I was going to win. I ended up right on his bumper at the end of the race,” McGilberry said with a smile.

Just a few weeks later, he found the winner’s circle.

McGilberry won his first ever stock car race Saturday, June 4 at ECM Speedway in Arkadelphia by besting an all-adult field by a wide margin. The drivers he was racing with were all approximately 20 to 60 years old.

“I passed up to third or second and with four laps to go they threw another caution,” McGilberry said. “I passed that guy on the outside on the next restart, and I ended up beating everybody by about a straightaway.”

Winning is nothing new to McGilberry though and neither is blazing his own path.

McGilberry was diagnosed with Tourette’s syndrome as a first grader, but it’s something he’s embraced as he’s grown older. Up until sixth grade, he had only told his two closest friends about his disorder, which affects an estimated 1 in 100 children worldwide.

As a sixth grader, that all changed. As a class project, he had to make an iMovie and decided to produce one where he made public his battle with Tourette’s. Part of the three-minute video showed him fighting through involuntary tics — a constant battle for those that battle the neurodevelopmental disorder — but it also showed him racing go-karts, riding four-wheelers and playing basketball and baseball.

Chambers, then an 11-year-old, summed up the video with two quotes on notecards.

“I love my friends and family because they let me be me,” the cards read. “I’m just like you. I just have tics.” 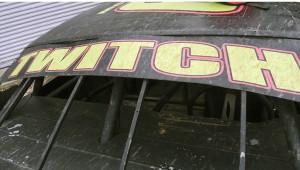 The Youtube video has over 6,000 views and a second video, published last year, already has nearly 3,000.

While racing go-karts, Chambers took on the nickname Twitch — one that he chose himself –— and is using it to raise awareness for Tourette’s.

He’s written “twitch” right above his stock car’s windshield in capital letters and plenty of fans see it as he’s racing around the track. Unfortunately, many of his competitors don’t, since most of them are usually looking at his rear bumper.

“We have talked about it plenty of times and our conversation was we can help someone else who has similar issues that they have to deal with in life and let them know you can still live your dreams [even] though you have a little struggle,” said Darren McGilberry, Chambers’ dad.

Chambers plays nearly every sport at Meadowview Christian School, where he’ll be a ninth grader in the fall. He’s on the basketball, football, cross country and baseball teams and is hoping the school adds fishing and bowling next year. He said there isn’t a sport he doesn’t love. His mother, deAnn, said when Chambers is playing a sport, he doesn’t tic at all.

“I think he likes adrenaline stuff because his tics go away,” deAnn said. “The minute he pushes the gas, he doesn’t have any tics until he stops.”

Chambers has talked about becoming a spokesperson for Tourette’s syndrome down the road, much in the way U.S. soccer goalie Tim Howard talks openly about the disorder now.

For now, he’s got races to win.

Chambers was a racing phenom from a young age. He started racing go-karts at age 6 and he estimates that he’s won between 40 or 50 races in his career. He started off running local races, which usually had limited fields, but was having so much success that he moved on to races all around the southeast.

“There were five or six kids locally but you could go to Carolinas, Georgia or Florida and race against 30 or 40 kids,” Darren said. “Once we were winning here, we decided we wanted to branch out and see how good we really were.”

As it turns out, they were pretty good.

Chambers has won several Unilli state championships, a go-kart racing league, and received a leather jacket to commemorate those titles. There’s still a post from 2014 on the Alabama State Unilli Series Facebook page that shows Chambers in the leather jacket he was awarded for winning the championship that year.

At age 9, he raced Bandolero cars in a series at Atlanta Motor Speedway and worked out of the same pits and garage drivers in NASCAR’s Sprint Cup Series use.

Chambers won the Alabama points championship that year, but didn’t like racing on asphalt and wanted to go back to dirt tracks, where he says more skill is required to drive the car.

After a few more years in go-karts, he’s moved on to stock cars, where he’s finished in the top five in six of his eight races.

He’s also teamed up with Justin McRee, a racer from Vance that has taken Chambers under his wing. McRee owns and operates High Roller Race Cars, a company in Woodstock that builds race cars.

Darren and Chambers bought a late model car in recent weeks that just happens to be one McRee used to drive. The plan is to have Chambers competing in it in about a year.

“It was one of the first cars he built and he won a bunch of races in it,” Darren said. “He wrecked it quite a few times but he said you couldn’t kill it, so he named it Casper. “

Chambers uses the number 66 in honor of his grandfather, Claude Strother, who picked the number when he used to race because it’s the tag number for Wilcox County. It’s a number he’s taken to victory lane dozens of times and one he hopes to keep winning with throughout the summer.

Maybe one day he will drive it in the top late model dirt racing series.

“I want to get up to the Lucas Oil Series and do it against the really good people who do it for a living,” Chambers said.

He’ll race next weekend at Magnolia Motor Speedway in Columbus, Mississippi. On that same weekend, the Lucas Oil Series will race at Magnolia, giving Chambers an up close look at the series he hopes to race his way into one day.

Darren said he’s going to do everything he can to make sure his son gets there.

“As a parent, my dream is whatever his dream is and right now that’s to drive a late model dirt car and try to make a living at when he gets older,” Darren said. “If that’s what he wants to do, I’m going to try to make that happen the best way I can.”