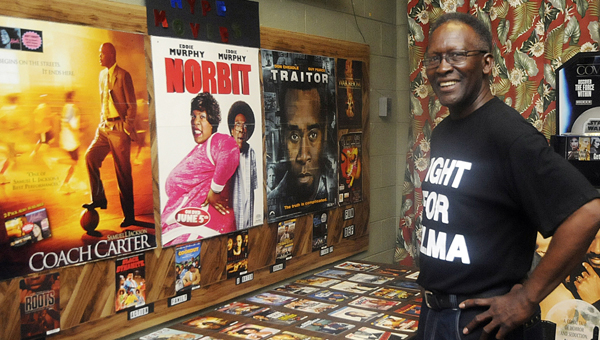 Albert Southall has set up an African-American literary and arts museum at Tipton-Durant Middle School for students, community children and adults. — Chelsea Vance

Albert Southall, who served as a foot solider in the Selma to Montgomery Marches, is giving back to the community through his passion for reading.

He has set up an African-American literary and arts museum with books, posters, paintings, magazines, albums and more that he has accumulated from his 22 years of teaching in the Dallas County School System.

“I used to do black history programs and bulletin boards. I set up something for the kids every year,” Southall said.

He has taught at Tipton-Durant Middle School, Bruce K. Craig Elementary School and Shiloh Elementary School but has now retired. Southall said he started the exhibit because he grew up in during a time where he said blacks were forbidden to read books. He believes every child should read as much as they can.

“The exhibit was started on literacy. I have so many books and everything else like vinyl records, movie posters and African-American figurines,” Southall said.

He is using the exhibit as a starting point toward an ultimate goal of bringing a museum to Selma. Southall said starting a museum has always been a retirement plan of his. He is writing a proposal to apply for grants so that he can gain funding for museum space.

“My museum will only showcase positivity. Blacks have been displayed as worthless, trifling and thuggish and I’m against that,” Southall said.

Southall has a vision of increasing literacy in the community.

The exhibit has been at Tipton Middle for months where students could come by inbetween classes to check out books and look at African-American art.

“We want to be a part of anything we can do that will place a positive mindset into our children,” Averhart said. “It has been very beneficial to the students here. It has made them more in tune with their heritage.”

She said the community as well as tourists of Selma would be able to learn a lot from the museum once it is finished.

“This will be one step toward positivity in Selma that will get others to catch on. Before long with the ambition that Mr. Southall has, there will be people who come to look at the bridge and other monuments who will add this to their checklist,” Averhart said.

Southall plans to incorporate a computer lab in the museum as well as all of the things featured in the Tipton Middle exhibit. He wants to have at least eight to ten rooms that will each have its own theme.

“Reading is knowledge. It opens doors, gives direction and is very important. You can travel with your mind through reading,” Southall said. “I want people to come to my museum and recognize how productive they can be through literacy.”