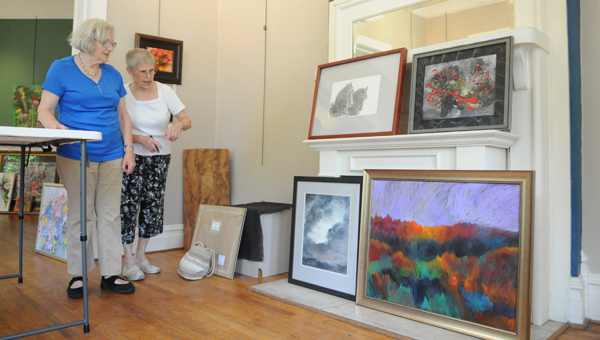 The Selma Art Guild spent Friday and Saturday collecting the final pieces of art for its upcoming summer show that with feature a special guest juror.

The show is held annually and is one of the most anticipated shows each year.

“We really look forward to it,” said art guild co-president Joanna Nichols. “We like to see really good art coming in, new people coming in and seeing what they do.”

The opening reception will be on Sunday, June 19, from 2-4 p.m. Awards will be presented at 3 p.m. The gallery will be available for viewing through Saturday, July 30.

University of Alabama at Birmingham painting and drawing professor Gary Chapman will be this year’s juror.

With a record of more than 60 solo shows, Chapman’s work has been shown in many venues including The Montgomery Museum of Fine Arts, University of Cincinnati, University of Miami and other galleries. Chapman has also been exhibited in multiple regional, national and international group shows. Many of Chapman’s works are featured in permanent museum collections throughout the Southeast.

Chapman received his Master of Fine Arts from Cranbrook Academy of Art. In 2013, he was named a CALL Legacy Artist by the Joan Mitchell Foundation.

“Being judged by him, if you are a winner, would really be an honor for yourself,” said art guild secretary Jo Pate.

Artist Cam Guarino said having an academically trained artist to jury the show is a learning experience.

Nichols said the difference between a juried show and a non-juried show is the possibility of not being accepted, and therefore making it more meaningful to make the cut.

“It’s much more prestigious to have a juried show,” Nichols said.

Nichols believe artists’ love the sense of competition and accomplishment associated with it.

Entry was open for all artists, members and non-members, with no theme to hinder the artists’ inspiration. Artists could submit works into various categories such as transparent, opaque, photography, three-dimensional and multimedia with a limit of no more than two works per category.

“We don’t want too many of one category,” Nichols said.