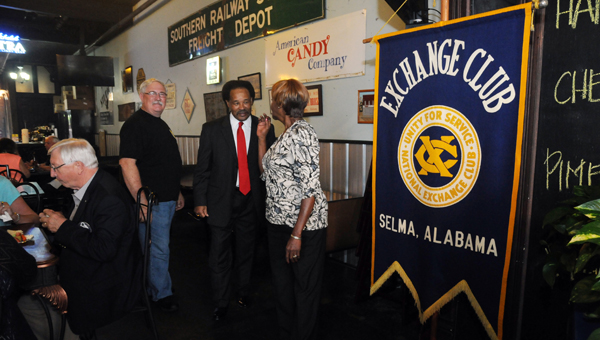 The Selma Exchange Club held its 95th anniversary celebration at Charlie’s Place on Wednesday,. The civic group invited individuals in the community for a meet-and-greet with the hopes of increasing membership.

Robert McConnell has been a member of the Selma Exchange Club for roughly 20 years.

For him and other club members, it’s a way to give back to the community and to work toward preventing child abuse.

Club members, dignitaries and guests congregated at Charlie’s Place on Wednesday to celebrate nearly a century of service in the area.

“It’s been a long time coming,” said local club president Kelley Sue Giampietro. “There are very few civic organizations, service clubs that have been in business for 95 years.”

The Exchange Club has been giving back to communities nationwide through scholarships, mentoring and working to prevent child abuse.

McConnell said although he has never had to deal with the issue of child abuse personally, being a father of two he sympathizes for other families.

“When you listen to some of the presentations given from these child care groups, its kind of mind boggling the stuff that goes on and the way children are harmed,” McConnell said.

The local chapter raises money through fundraisers such as its bed sheet sales and annual barbecue. The money raised is then donated to local agencies such as SABRA Sanctuary or the Central Alabama Regional Child Advocacy Center.

“It’s just a very worthwhile civic organization,” McConnell said. “They do a lot of good in the community.”

The group meets every Wednesday at 1 p.m. at the St. James Hotel.

“People can really relate to something like this. There are so many things that we do, whatever it is that they are sold on, we’ve got it, and we would love to have them,” Franklin said.

Other interests of the organization include the prevention of Shaken Baby Syndrome and combating Fetal Alcohol Syndrome.

Franklin believes it is important to have involvement of younger generations in the civic group to keep the vitality of the organization going.

“We need their young blood; we need their ideas,” Franklin said. “There may be some things that they could think of that we would never have thought of.”

Although civic group membership has been declining nationwide, Franklin believes the need for civic groups will always exist.

“[The club] was based on meeting the needs of the community,” Franklin said. “That will always be something that needs to be addressed.”

For more information about the Exchange Club, visit www.nationalexchangeclub.org.