Captain D’s has 18 hits in win over Trustmark 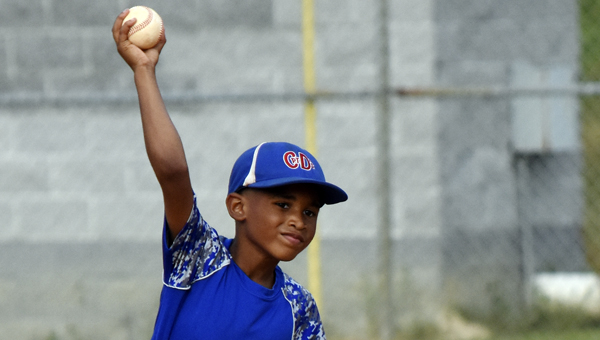 Captain D’s is only one win from claiming the city’s 7-and 8-year-old baseball championship.

The Rangers rolled past the Trustmark Braves 16-3 in a semifinal played Friday at the Dallas County Sportsplex. Rodney Martin and Jamarcus Acoff hit a 3-RBI home runs to lead the offense for Captain D’s.

“We practice hitting and defense — that’s the main things we practice,” said Captain D’s head coach J’vantae Furlow. “Some of them were in a slump, but they came out of a slump.”

Captain D’s had 18 hits in the game and took control early with four runs in the first inning.

Trustmark couldn’t get anything going in the bottom half of the inning. Wallace Gilmore and William Colquett flew out to Eaton to begin the game and Rhett Thomas grounded out to finish the inning.

The Rangers put the game away in the second inning.

Jasean Lewis’ ground out scored Te’Kevious Beal, who had singled to start off the inning. After a RBI by Devin Woods, SaMarion Woods doubled to bring in Devin. After a ground out tacked on another run, Eaton doubled to right field and Acoff singled.

With those two on, Rodney Martin homered to right field to make it 11-0 Captain D’s.

In the bottom of the second, Trustmark fought back. The Braves scored on singles by Myles Nix and Braden Little to pull within 11-2.

Captain D’s limited the damage by forcing Patrick Johnson to strike out and Thomas Atchison to fly out to end the inning.

“We work on a lot of pop flies because mainly you are going to get people swinging late, so we work a lot on pop flies,” Furlow said.

Trustmark added one more run on a groundout by Colquett, which scored Jack Cobb. Beal and Glenn Johnson singled in the fourth to take on two more runs for Captain D’s and in the fourth inning the Rangers added three more runs on Acoff’s home run.

The game was called due to the 10-run mercy rule after four innings.

Trustmark’s season ended, but head coach Tommy Atchison was proud of the way his team played all season.

Two of the highlights of the game came on defensive plays by the Braves. Gilmore dove to catch a fly ball in the outfield and Rhett Thomas make a backhand grab at shortstop to stop a sharply hit ground ball from bouncing into the outfield.

“We have a very young team and our kids have improved from the first practice to now. It’s 180 degrees,” Atchison said. “We have a young team and we won a lot of ball games. We played really, really well. I’m really proud of them.”