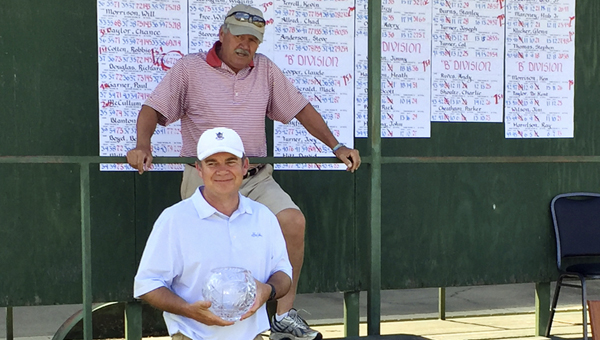 Going into the final round of the Selma Country Club’s 88th annual Men’s Invitational, Robbie C. Cotton needed to shoot the best round he’d shot in 15 years in Selma.

Cotten did just that, shooting a 67 to go from 3-over to 1-under par to win the three-day tournament with a total score 212. It was his first win at the Selma Country Club since 2001, when he won at 35 years old. It took a strong start, help from Mother Nature and, as Cotten put it, a little bit of luck.

“I figured it would take about 3-under par to have a chance because the wind was blowing real hard, and luckily I made enough birdies and just one bogey to pull it off,” Cotten said.

Cotten, who lives in Brewton, said the wind can play to his advantage because, at 50 years old, he doesn’t hit the ball quite as high or as far as some of his opponents. Playing well in the wind helped him get out to a quick start in the final round and helped him get into contention early.

Cotten birdied the first, third and seventh holes to drop his overall score to even par. The hole that really made the difference, Cotten said, was the ninth hole, where he sank a 35-foot putt to make par.

“I really played the hole bad all week, and I played it bad on Sunday, but luckily I made that long putt to save par and keep the momentum going,” Cotten said.

A steady back nine was disrupted when Cotten made a bogey on the 16th hole, but he corrected it on the 17th hole with a birdie. Cotten said he didn’t know exactly where he stood as he was nearing the end of his final round.

“I was very nervous coming down the last hole because it’s the first time I’ve been in contention for a golf tournament in a long time,” Cotten said.

“I was real nervous, and I guess it was a sigh of relief, happiness and gratification.”

He didn’t expect to win this tournament at 50 years old, but it’s given him confidence that he can still compete at a high level.

“I’m thankful to be able to win one more,” Cotten said.