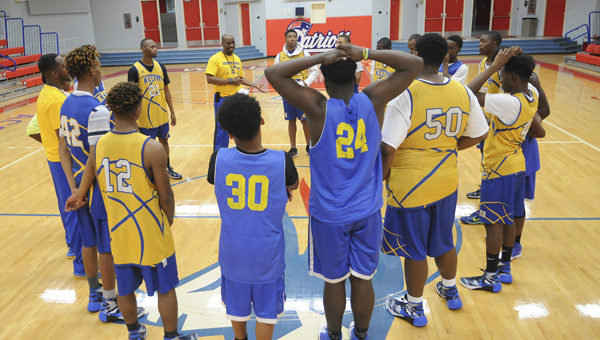 The Keith basketball team huddles together during a practice at Wallace Community College Selma earlier this year. The Bears are one of the host teams for the upcoming Selma Summer Slam basketball playdate, which will take place June 1 at Selma High School, Concordia College Alabama and Wallace

The Selma Summer Slam is back again this year and it’s as big as ever.

The playdate will take place June 1 and will include 22 boys basketball teams from all over the state of Alabama.

Keith Middle/High School athletic director Tommy Tisdale said his phone has been ringing off the hook this year from schools trying to get in.

“Ironically this year I had more schools call me than I called them,” Tisdale said.

Tisdale said that shows that the annual playdate has become one of the best in the state. This year’s field includes 12 teams that qualified for the Alabama High School Athletic Association’s state tournament in their class last year.

“Two or three years ago, it was probably one of the best kept secrets,” Tisdale said of the playdate. “Of course, it’s probably no secret now.”

Many of the schools traveling to Selma for this year’s playdate made deep postseasons runs last year. Midfield was the runner-up in 3A, Sumter Central qualified for the semifinals in 5A and Hoover (7A), Park Crossing (6A) and R.C. Hatch (2A) all reached the quarterfinals in their classes.

“This is not just a 1A thing, you are playing great teams from classifications from 1A up to 7A,” White said.

“When you are putting on events such as this where people want to come, it means you are doing something good.”

The tournament will start at 9 a.m. on June 1 and will continue until late into the evening.

The final games are scheduled to start at 5 p.m.

A tentative schedule has been released, but is subject to change. Tisdale said a couple of teams have asked to get into the tournament, while others said they may have to drop out for various reasons, so the schedule is far from set in stone. Each team is guaranteed three games.

Southside is on the schedule for games against Prattville and Midfield. A third opponent for the Panthers and Saints is yet to be determined.