The Selma Art Guild is blooming from wall to wall with springtime inspiration for its people’s choice show.

The guild’s “A Flower Show,” opened on Sunday, May 15. The show will be available for viewing at the gallery, located at 508 Selma Ave., every Friday and Saturday until the end of the month. 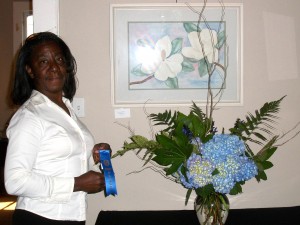 Bezelyn Anderson was awarded best flower arrangement at The Selma Art Guild’s “A Flower Show” on Sunday, May 15.

In the art category, Gena Clements was awarded first place. Cam Guarino followed in second and Karen Weir was third.

“I thought it would be very nice to have paintings of flowers and also real flower arrangements,” said co-president Joanna Nichols. “It worked out really well. We got a lot of new art in for the gallery.”

Both guild members and non-members were invited to submit works of art and flower arrangements. There wasn’t a limit of how many pieces an artist could submit, according to guild secretary Jo Pate.

“It was definitely an open show,” Pate said. “We are always looking for new ways to attract different groups of people. We felt like we got some interest from garden clubs and such.” 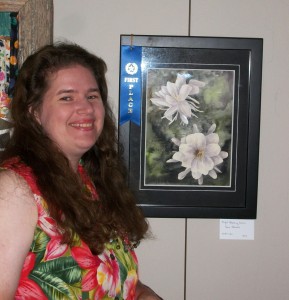 Gena Clements was awarded first place for her painting at The Selma Art Guild’s “A Flower Show” on Sunday, May 15.

Pate said artists submitted anywhere between two and five works of art, each. She said artists were local and regional, with some artists coming from Hoover and Montgomery.

The show consisted of 40-50 art works and nine flower arrangements.

For the art works, mediums ranged from mosaic to watercolor, oil, acrylic and more.

Winners were selected by people’s choice. Anybody that attended the opening reception could vote on his or her favorite art works and arrangements.

Nichols said because the flower arrangements don’t have a long shelf life, they will not be available for viewing for the remainder of the month. The arrangements were only in the gallery during the opening reception. 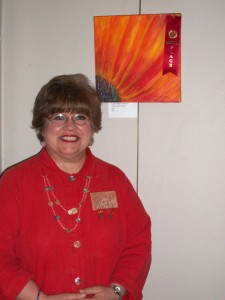 Cam Guarino was awarded second place for her painting at The Selma Art Guild’s “A Flower Show,” on Sunday, May 15.

Pate believed the show was revolutionary for the gallery.

“We have always received floral paintings, but we have never had a show just about flowers,” she said. “It was a roaring success. Everybody loved the fact the fresh flowers were there.”

The show included a variety of ceramics and the photographs featured ceramics and ceramic making as its subject matter.

Pate said the flower show was to introduce new people to the gallery for its upcoming summer show.

“They’re all excited about the summer show,” she said.

The gallery will be accepting art for the summer show on June 3-4.

The show will have its opening reception on June 19. It will be juried by University of Alabama at Birmingham’s Gary Chapman.