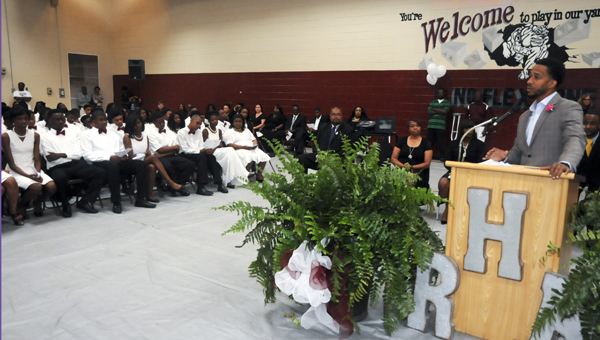 R.B. Hudson Middle School promoted more than 100 eight graders in a ceremony Friday, sending them on to start their high school journeys.

Students gathered in the gym to be recognized for their accomplishments.

The guest speaker was Alabama State University assistant head football coach Allen Suber. He gave students tips on how to keep their eyes on the prize.

In his speech, Suber said he wanted students to realize how critical it is to plan as much as they can.

“I thought about the things I wish someone would have told me that I needed to be thinking about or preparing for as an eighth grader. This is probably one of the most impressionable times in their lives,” Suber said.

He said he wanted to let them know that someone understands the pressure they may experience as high school freshmen.

“One of the most challenging things for them right now is creating and owning their identity and not conforming to what society tells them they should look like or what they should be doing,” Suber said.

R.B. Hudson Middle School principal LaShonda Moorer shared the podium and gave her best wishes to students she has seen mature in their time at the school.

“These students will go on to be successful. They have strong values and support systems,” Moorer said.

This is her first year as principal at the school and she said she has been through a transition along with her students.

“Seeing those students achieve today was a blessing,” Moorer said.

R.B. Hudson student Brianna Miles attributed her time at the school for the growth she has seen in herself.

“I have had a lot of good days here and there were others where I had to buckle down and get myself together,” Miles said. “I have matured a lot. At first, I was a follower and when I got here I realized it was OK to be different. I stepped out and became a leader,” Miles said.

She was a cheerleader and served as co-captain and captain of the team between her seventh and eight grade years. She was also the Student Government Association parliamentarian and Future Business Leaders of America president.

“I feel like I have achieved something great. I’m going to high school, and I am excited about that,” Miles said.

Bryant Gordon will attend Selma High School in the fall where he plans to play football and already has an idea on what he wants to be in life.

“I want to major in journalism when I go to college because I like writing and taking pictures. It feels good to move on to the next level,” Gordon said.