Henry to retire from church

After many years in the ministry, including 15 years at Elkdale Baptist Church, Dr. Jerry Henry will retire from First Baptist Church in Fairhope later this month. 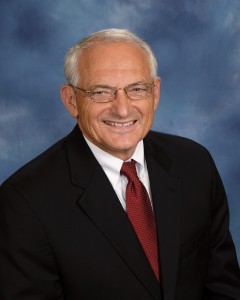 Henry was born and raised in Selma and was introduced to Elkdale as a child because it was close to where he lived. He served as pastor of his hometown church from 1986 to 2001, when he moved to Fairhope.

“One of the hardest things for me to do was to leave Elkdale Baptist Church, but I felt God’s calling me here to Fairhope,” Henry said. “We saw Elkdale grow and God blessed us there. I enjoyed being in my community where I grew up. I would never trade my time there for anything in the world.”

Henry has now given another 15 years of his life to First Baptist Church.

“It has been a great experience. Fairhope is one of the fastest growing communities in Alabama. There are a lot of new people who move here to Fairhope,” Henry said.

Henry also served as pastor of Marion Junction Baptist Church for one year in 1985.

Overall, the 71-year-old said he appreciated Selma for the childhood he had and being the place of his roots.

“I could not have had a better upbringing than the one I had in Selma. It was a great time to grow up with the kind of values that were built into my life from my mother and all other people who played a part,” Henry said.

Henry lives in Fairhope with his wife Susan, his high school sweetheart. They have three children who are now adults: Mike, Rusty and David. Henry and Susan have seven grandchildren, three girls and four boys.

After his retirement from First Baptist Church on May 31, Henry does not plan to pastor full time at any other church but said he may possibly hold adjunct positions from time to time if he is needed. Family time is his main focus from now on.

Long-time church member Laureen Davis said Henry has made an impact on the congregation over the years that she won’t forget.

“Our entire community will miss Dr. Henry. One thing about him is that he is genuine. What you see is what you get,” Davis said. “He is very humble and there is not a better pastor.”

“Dr. Henry is a dear friend and has been a great asset to the Fairhope community. He has served as chaplain to the city council and been available to me personally and to the city for many years,” Kant said. “I wish him the best in his retirement.”

A celebration service will be held at First Baptist Church, located at 300 South Section St. in Fairhope. It will be Sunday, May 15 starting at 5 p.m. with a reception following.