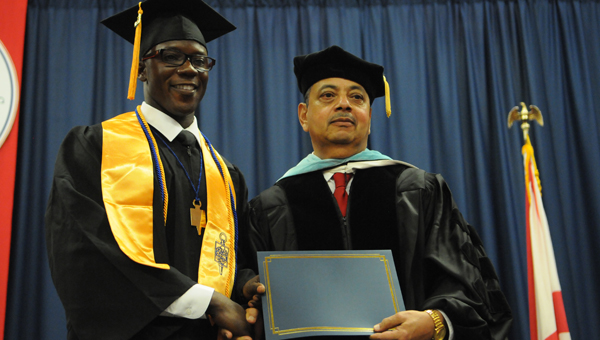 When Antonio Callen’s name was announced as a graduate at the Wallace Community College Selma commencement ceremony, he walked to the middle of the stage, landed a front flip and pointed to the crowd as a gym full of parents and graduates showered him with applause.

Callens said he’s had to overcome a lot of obstacles to graduate, and he believes anyone is capable of achieving success if they work hard to achieve it.

At the Wallace gymnasium Friday, a school record 240 graduates walked across the stage to receive their diplomas. Another 200 who weren’t in attendance also graduated from Wallace. 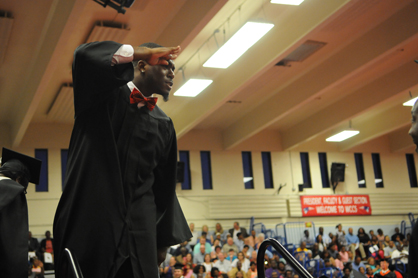 Antonio Callen salutes the crowd at the Wallace Community College Selma gymnasium after receiving his diploma. Callen energized those in attendance by doing a front flip once he stepped on the stage.

During his speech, Mason said it takes grit to graduate from Wallace, with each letter of grit holding a different meaning. After spelling out the acronym, which stood for growth, resilience, initiative and tenacity, Mason challenged the class of 2016 to lead prosperous lives.

“The future holds great expectations for us,” Mason said. “It holds, change, innovation and new opportunities. We have a responsibility to leave the world better than we have known it.”

Mason also earned the James M. Mitchell Award, named after the president of the school.

Mason was followed by guest speaker Jimmy Baker, chief of staff for the Alabama Community College System. Baker implored the 240 students to never stop bettering themselves and to always be kind and respectful to one another.

Baker also asked the graduates what they are committed to accomplishing.

“What is it in life that you want to be known as,” Baker asked. “And as you get into those later years of life, what kind of person do you want people to know?”

Kiara Horton, a senior at Southside High School, was one of 20 students who graduated through with the first class of dual enrolled students from the Dallas County School System. Horton was recognized with the Academic Excellence Award, for earning the highest GPA for the entire graduating class with a 3.946.

“I feel so accomplished. I’m proud of myself. I’m just excited for what the future holds for me and I feel like I was well prepared by Wallace,” Horton said.

After all the graduates received their diplomas, another Wallace dual-enrollee from Southside, Khamari Gibbs, closed out the ceremony with a benediction.

While the graduates, parents and faculty were smiling throughout the ceremony, perhaps no one exuded as much happiness as Callen, who danced all the way back to his seat after stunning the crowd with his gymnastics on stage.

“It was excitement and joy,” Callen said. “Through all the negativity in my life, that was a positive feeling. It’s a very emotional state of my life.”