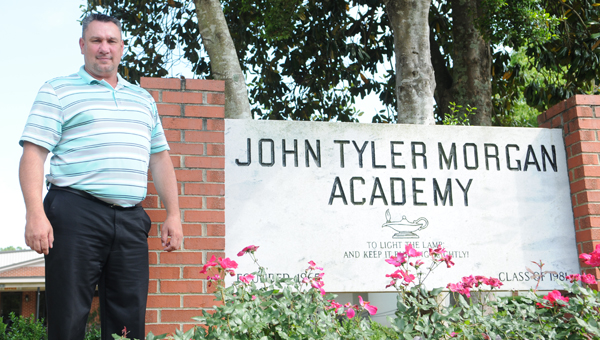 Mark Knight is the new headmaster of Morgan Academy. He comes to Morgan from Jemison Middle School.

Mark Knight hasn’t slept much over the past few weeks. He believes the explanation is his excitement to begin his new job as Morgan Academy’s headmaster on June 1.

Knight, currently the principal at Jemison Middle School, is spending as many afternoons as he can over the next month at Morgan, getting acquainted with students and faculty and learning his way around the school’s campus. The long-time coach, teacher and administrator said he’s dreamt of being headmaster at a private school for a while.

Now that the opportunity has come, Knight said he looks forward to encouraging each student to achieve his or her best in and out of the classroom.

“I’m ready for the next chapter of my life,” Knight said. “I think God really sent me here. I think he has a plan for me.”

Knight’s connection to the city of Selma goes back over 30 years, when he was a baseball player in 1984 and ’85 for Wallace Community College Selma. Sports have been a large part of Knight’s life, and he said he wouldn’t be where he was today without them. He hopes to bring some of that experience to building and retaining a coaching staff at Morgan that will help the school succeed in sports.

“I think I can help Morgan get back where they want to be athletically,” Knight said.

In 1990, Knight started coaching football, basketball and baseball at Smiths Station High School. In the fall of 1993, he went back to Clanton, where he grew up, and got a job at Chilton County High School and continued coaching.

Once Knight had kids, he transitioned into more of an administrative role and coached less to spent more time with his children. In 2001, he accepted a job with Jemison Middle School, where he was assistant principal for five years and principal for the last 10 years.

He currently has a 21-year-old son and a 17-year-old daughter and two step-daughters in graduate school.

Knight said he holds the belief that God comes first, family comes second and academics comes third. In addition, he said he places an importance on making sure every student is involved in extracurricular activities.

“I think the school runs a lot smoother if kids are involved and I want to keep pushing them to be involved in everything,” Knight said.

So far from what Knight has seen at Morgan, the school already puts an emphasis on making sure all the students stay involved in other activities. Knight also complimented the school’s wide range of curriculum, giving him confidence that his new school provides the chance for students to learn a variety of skills during their time at Morgan.

Knight has no doubts Morgan is where he’s supposed to be, but in case he needs a reminder, his lack of sleep lets him know he made the right choice.

“I wake up at night thinking about this new opportunity, and I think God put me here for a reason,” Knight said.