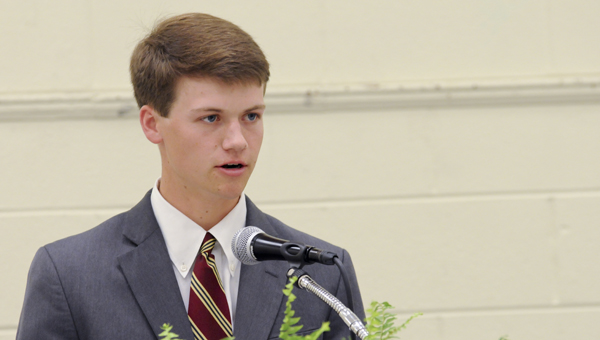 Harrison Adams etched his name unto a long list of young men honored as the Paul M. Grist Boy of the Year.

Adams, a senior at Morgan Academy, is the son of Bart and Stacey Adams and becomes the 68th Boy of the Year going back to 1949.

“I look at the people who were nominees along with me — such a select group. I’m so honored to be part of the group with y’all,” Adams said after receiving the award. “I am humbled and grateful for this honor.”

Adams thanked God for blessing him “each and every day” and his family, friends, Morgan Academy and Church Street Methodist Church for their support through the years.

“There have been so many influential people in my life,” Adams said.

Adams has played football, basketball, baseball and golf at Morgan Academy and is involved in many organizations on campus, including the Student Government Association, National Honor Society and Senior Beta Club. He is also an Eagle Scout.

“We are really proud of him. He works so hard at everything he does,” said Stacey Adams. “Like they said all night, what is so impressive is the young people we have in the community and the children we have growing up here.”

Adams is considering several colleges, including the University of Alabama, Auburn University and Vanderbilt University. He plans to study economics.

Before Adams took to the stage, the audience heard from NFL player and Selma native Michael Johnson, who was a Boy of the Year nominee and valedictorian of Dallas County High School.

Johnson told the young men to remember to thank those who have helped them so far in life by always doing their best.

“Remember when you go out and whatever you decide to do in life who you represent,” Johnson said. “You are not just representing yourself. You are representing your community and all those people who poured their time and energy into you. Appreciate that and thank them by going forward and doing your best.”

Johnson talked about similarities between life and the football field.

“That’s why I love football so much because it parallels so much to life. There are many ups and downs in many sports, just like life,” Johnson said. “It’s not always going to be easy. It’s not always going to go the way you think it should go. There are going to be times you work your tail off and you still don’t get picked. You still are not the one. Don’t be discouraged or dismayed by that. Just let that instill in you even more of a fire to keep on pushing, to keep on striving.”