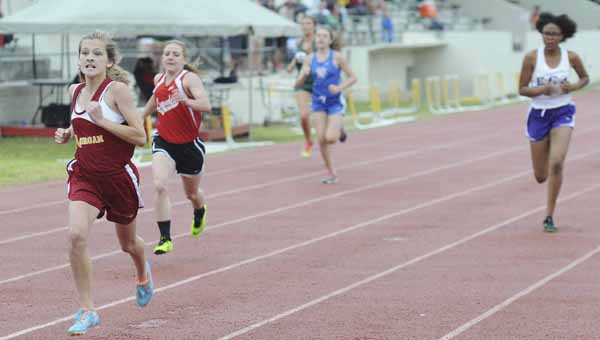 Morgan Academy seventh grader Kristen Little runs away from the pack in a 400-meter race in the Alabama Independent School Assocation state meet Wednesday at Memorial Stadium. Little finished first in her heat and third overall with a time of 1:11.60 to qualify for the state finals on Thursday. — Justin Fedich

Morgan Academy freshman Peyton Granthum couldn’t stop smiling as she crossed the finish line first in the 100-meter dash. She said she was so nervous she felt sick all day, but when the starting gun sounded, the nerves paid off.

Granthum was one of many Morgan Academy Senators to go fast enough qualify for the Alabama Independent School Association’s state finals Wednesday at Memorial Stadium. The stadium was filled with schools from all over Alabama, and an afternoon rain was just minor enough to not cause any delays in the action.

“We got lucky,” said Morgan head coach Rob Robinson of the weather. “It actually turned out perfect.”

For Morgan, there was plenty to celebrate other than the weather. The top eight finishers in most events Wednesday move on to the finals Thursday. Some Morgan competitors made the cut, while others just missed out.

Kristen Little, a seventh grader at Morgan, had little doubt she was moving on to the finals as she looked back to either side to make sure she was going to win her heat of the 400-meter dash. Little ran the race in 1:11.60, good for third overall in the girls 400-meter.

“She’s already good, but to think she’s just in the seventh grade,” Robinson said. “There’s no telling how good she can be.”

Although Little’s time is five seconds behind the best time in the girls 400 meter, Little is confident she can pull out a victory on Thursday.

Anna Tidmore also qualified for the finals after finishing third overall in her event, the 800-meter dash. Tidmore, a sophomore, ran 800 meters in 2:43.51.

run Wednesday, which only had one heat and no final. Morgan senior Jaycee Sanders placed fifth with a time of 14:29 and eighth grader Caroline Thomas finished in eighth place with a time of 17:04.

In the field events for the girls, Thomas qualified for the finals in the girls’ discus throw after coming in fourth and senior Jane Anne Stewart qualified in the triple jump with an eighth place finish.

On the boys side, sophomore Sam Brackin was two tenths away from qualifying for finals in the 100-meter dash, but he managed to qualify in two other events. Brackin finished sixth overall in the 200-meter dash with a 23.99. He narrowly qualified for the long jump with an eighth place finish. Brackin has confidence he can do better Thursday in the long jump.

“I got over there and someone moved my mark, so I was jumping blind pretty much,” Brackin said.

Freshman Dae Dae Russell joined Brackin in qualifying for the 200-meter dash with a time of 24.54 for an eighth place finish. Senior Stacy Russell will join Brackin in the long jump after he finished sixth place in the event.

Freshman Ed Williams also came in sixth overall in his event, the 400-meter dash, finishing second in his heat to qualify for finals with a 58.75.

In the 1600-meter run for the boys, which only had one heat and no final, senior Davis Campbell ran a 5:26, which placed him sixth.

“It wasn’t as good as I usually do,” Campbell said. “These conditions really played a big part. Not only in the difficulty of running, but also in the mental aspect.”

Freshman Taylor Jones finished close behind Campbell with a 5:31 to round out an overall successful day for the Senators.

As proud as Robinson was of Granthum, the lone event winner for the Senators on Wednesday, he knows that Thursday is what really matters.

“It means nothing, except to qualify,” Robinson said. “You’ve got to do it again tomorrow.”