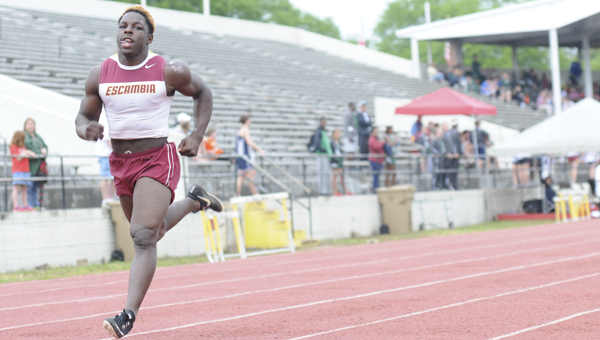 Escambia Academy’s Kris Brown breaks away from the competition during the 400 meter race Wednesday at Memorial Stadium. — Justin Fedich

Kris Brown is only a junior at Escambia Academy, but he’s already gotten to the point where the only records left to break are his own.

Then, Brown did it all himself with a 100-meter time of 10.76 that broke a long-standing Meadowview Christian record of 10.79.

Even though he broke multiple records, Brown thought he could’ve done better.

“I feel blessed because of the weather right now,” Brown said. “I feel like I could have broken a lot better if it didn’t rain, but I’m just blessed to come out here and represent my school.”

Brown wasn’t celebrating too much over his success Wednesday. He failed to break the 200-meter record of 22.09. He only ran a 23.37, good for first place overall in the meet. Although he didn’t break the record, he was fine with that because he set the record of 22.09.

“He wants to be his own person, so he’s breaking his own records,” said Brown’s brother Patrick McGhee.

While Brown didn’t set a new record in the 400-meter dash, he beat the next-best runner, McGhee, by more than a second with a 53.61. There was no one near Brown when he cruised through the finish line, and Brown said the 400-meter dash isn’t even his best event.

“I usually don’t even run the 400, but I’m dedicated to whatever my coach tells me to do,” Brown said.

McGhee, a freshman at Escambia, said Brown is always pushing him to workout and get better so that he can be breaking Brown’s multiple records by the time he’s a senior.

“He worked hard for it, and he deserves it,” McGhee said. “That gives me something to get so I can try to beat his record when I’m a senior.”

McGhee believes that if he works hard enough, he’ll be able to beat his brother, who appeared unbeatable in the qualifying round Wednesday.

Brown wants to play football and run track in college. Although he’s a junior, he’s already in talks with multiple schools, including Southern Misssissippi and Troy, about becoming a multi-sport student athlete in college.

Brown has been running since third grade. While he doesn’t have much left to prove to others on the track, he still has much to prove to himself. On Thursday, he plans to keep trying to break records, many of which he now owns.

“I knew I was going to try, but I also worked hard for it,” Brown said. “That was the plan today. I’m determined to break the record, so when I leave, my name will be in history.”