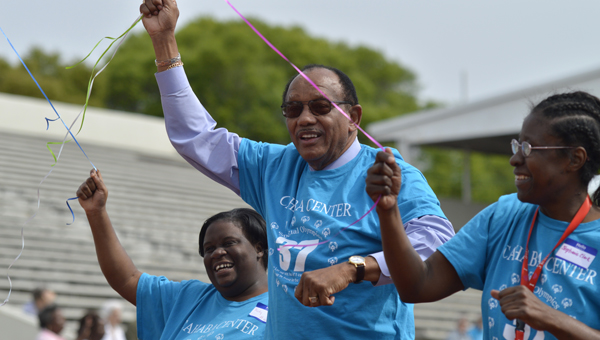 Becky Mitchell, Selma Mayor George Evans and Stephanie Clark run in with balloons at the Special Olympics on Wednesday at Memorial Stadium.

Wayne and Pam Sellers have made sure to attend the Special Olympics every year for the past 15 years to watch their former foster child, Billy Barrett, participate in the games. Barrett is now 33-years-old, but the Sellers have considered him family since the first time they met him.

“We had Billy from the ages six through 10 and then he was adopted,” Wayne said. “We’ve remained part of his family ever since.”

The Cahaba Center for Mental Health hosted its 37th annual Special Olympics at the Memorial Stadium on Wednesday.

“It gives them a chance to show off their athleticism,” said Cahaba Center coach Tracy Vaughn. “It gives them something to be happy about [and] to look forward to each year. The competition is as if you were coming to a high school field and track meet.”

The 37th annual Special Olympics was held at the Memorial Stadium on Wednesday, April 6.

Posted by The Selma Times-Journal on Wednesday, April 6, 2016

Participants included residents of Selma and commuters from Camden, Marion and Montgomery.

The Sellers said the Special Olympics is a highlight for them each year.

“We just love watching them and cheering them on,” Pam said.

At 10 a.m., athletes and student volunteers gathered on the track for the opening ceremony parade.

After concluding the opening ceremonies, athletes were divided into groups and guided to various track and field events.

“I love it,” Leverett said.

Like Leverett, Barrett is full of enthusiasm for the games year round.

“To him, special Olympics is the highlight of his year. He talks about it all year. Every time we talk to him he wants to talk about Special Olympics,” Pam said.

The Special Olympics at the Memorial Stadium qualify the athletes to participate in the state games at Troy University in late May. Athletes will stay in university dorms over a weekend and compete in track and field events.

Participants are awarded ribbons and awards for their efforts.

“It gives them a sense of normalcy. They can do something and be proud of it,” Vaughn said.