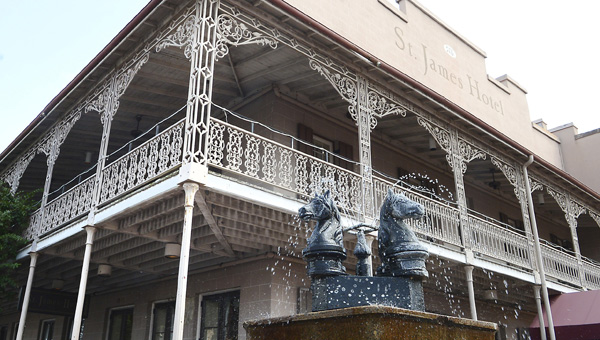 An appraisal is needed for the St. James Hotel.

An appraisal for the St. James Hotel needs to be done before the historic landmark can be sold.

That’s the consensus of a meeting Tuesday between the Selma City Council and businessman Mark Peterson.

Peterson is considering buying the hotel for the city’s asking price of $1.2 million, but said the property would have to be appraised for that first.

In this latest proposal, Peterson offers to pay to have the hotel appraised through a third party. Should the hotel be worth more or less than $1.2 million, Peterson and the city would renegotiate the selling price.

“The million two is a number that is out there. I’m willing to pay that if it appraises for that,” Peterson said. “It if does not appraise for 1.2 million, I hope you would not expect me to pay that.”

Before spending money on an appraisal, Peterson has asked the council to approve a letter of intent, which outlines the hotel’s sale.

In his letter of intent, Peterson asks the city to pay him management fees until the sale closes at the same rate paid to Strand Management, which ran the hotel from the summer of 2014 through March 2015. Strand made about $4,800 in management and accounting fees.

Peterson has volunteered to manage the hotel since Dec. 1 at no cost to the city.

Councilman Cecil Williamson said he would rather the city manage the day-to-day operations than pay Peterson.

“People in the city did manage for months on different occasions,” Williamson said.

Councilwoman Angela Benjamin questioned which city employee had the time to take over the hotel.

“My question is who is this magical person that can run this hotel,” Benjamin said.

Peterson said he would understand if the city decided not to pay him to manage the hotel until a deal closes in June or earlier.

“If you don’t want me, pay someone else,” Peterson said. “My feelings won’t be hurt one bit if you get someone else to manage the hotel.”

In this letter of intent, Peterson also asks the city to take the hotel off the market through June and deduct any capital improvements he makes from the purchase price.

Peterson was asked how much money he has invested in the hotel so far. He said he didn’t want to guess, but he would provide the city with a detailed list. The city council has already approved several thousand dollars in air conditioning, windows and other repairs.

Peterson also asks for a 10-year moratorium on lodging and property taxes.

“If you want the hotel to succeed and prosper, that’s putting some skin in the game on both sides,” Peterson said. “I don’t know why this is a bad thing. I’m not trying to pull the wool over anyone’s eyes.”

Williamson said such a deal would be unfair to the other hotel operators in the city.

Peterson said his interest in buying the hotel wasn’t contingent on all those concessions being met.

The city council will meet Friday afternoon at 1 p.m. to discuss getting an appraisal done and to discuss the terms. Several council members thanked Peterson for the work he has done over the last three months.

“I don’t think anyone can disagree at all, you have worked your heart out down there,” said Councilwoman Susan Keith.

Benjamin said the hotel is still open because of the work Peterson has put in.

“We want to thank you because those doors are open,” Benjamin said.

The council and Peterson have been negotiating a possible sale since he made an initial proposal in October. Those terms evolved over the weeks but called for Peterson to pay $1 for the hotel now and then $1.2 million after eight years.

In late January, the council asked Peterson if he would be interested in buying the hotel outright for $1.2 million.