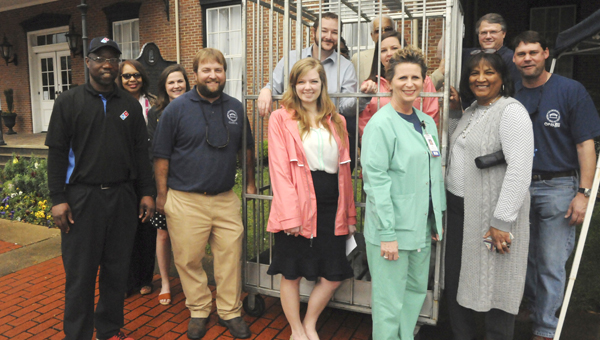 Selma-Dallas Leadership Class XXII members are shown at their Blessings in a Box Bail Out fundraiser Friday.

The purpose of the class is to give back through community service. Class member Ashley Mason said the class was trying to think of something different and fun to raise money for those in need at the hospital.

The class served warrants to 25 leaders of Selma, including Selma City Council members. Those served were given six weeks to donate or raise $500. If the money was not raised before Friday, they were arrested and put in a fake jail cell to serve time.

Inmates stayed in the cell until they could call people to donate more money.

“We haven’t had to keep anyone in the cell because everybody has been very generous and either raised money or donated themselves,” Mason said.

Selma Mayor George Evans was one of the people served. He said the fundraiser was a good idea and he was glad to participate.

“The hospital does need help. I think it is a good cause. I hope more people will get involved next time around. The idea created excitement and was positive,” Evans said.

He said he believed the fundraiser would prompt other leadership classes to come up with similar ideas and if so, it would be a good thing.

Teresa Smiley said she understands that everything helps when someone is in the hospital and can’t afford small things like cab rides home or personal hygiene items.

“I’m happy people donated money they could have used for themselves, but they chose to give to our cause so we can help people in need at the hospital,” Smiley said.

She said initiatives like the one Friday was the reason she joined the leadership class.

The class raised $7,000 dollars before the Blessings in a Box Bail Out from people who were served with warrants. Others donated on Friday. Two members of the leadership class were arrested and raised $1,000.

Members of the class said because of the event’s first-time success, they would be looking into making the initiative an annual project.