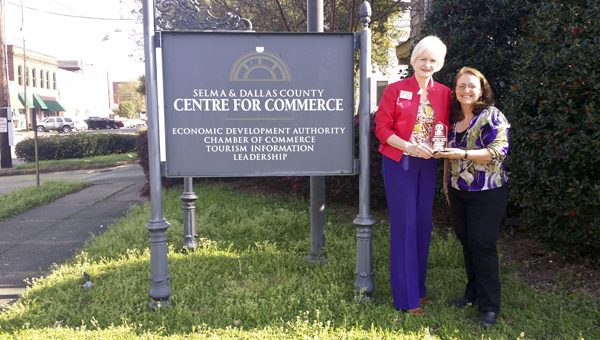 Director of the Selma Dallas County Chamber of Commerce Sheryl Smedley presents Executive Director of Old Cahawba Archaeological Park Lina Derry with the Attraction of the Year Award. This is the second year the park has won the award.

The Selma and Dallas County Chamber of Commerce has honored its attraction and event of the year.

Members of the public voted and chose Old Cahawba Archaeological Park as attraction of the year and Integrity Worldwide’s 5K as event of the year. Both also won the inaugural competition last year.

Chamber of Commerce Executive Director Sheryl Smedley said the awards are a way to spotlight what make Selma such a unique place.

“The purpose of the awards is to create an interest and show support to the attractions and events that are taking place in our community each year. It is also something for the public that is fun and will get them engaged in the community,” Smedley said.

People were able to vote on Google surveys over a two-week period.

“Because of our fans voting for us, we’re very grateful. We work really hard. I know Cahawba is a wonderful place and this award means that people love it. I want to thank the chamber for creating this award and would like to accept this on behalf of all attractions in Selma and Dallas County because I know they work hard too,” Derry said.

Dr. Alan Hicks accepts his Event of the Year Award from Sheryl Smedley, the executive director of the Selma and Dallas County Chamber of Commerce.

Dr. Alan Hicks and his wife Averee started Integrity Worldwide 5K a few years ago to give back to Kenya. Alan took to the country when he visited on a church mission years ago.

“We wanted to work on projects there from clinics to wells and libraries, but it has evolved to where we saw it as a way to bring the community together in Selma. It grew way beyond our expectations,” Alan said.

Other awards the chamber has given include the Media Advocate of the Year Award recipient, which was George McDonald with WAKA. Smedley said he has been supportive in broadcasting and letting the community know about upcoming events.

Lee Sentell is tourism director for the state of Alabama who won the Tourism Partner of the Year Award.

Smedley said he has shown support of the Chamber of Commerce by promoting of Selma.

“This past year we drew over 100,000 people to our community in one weekend. The whole state benefited from that. Tax dollars is what drives our community and our state,” Smedley said.