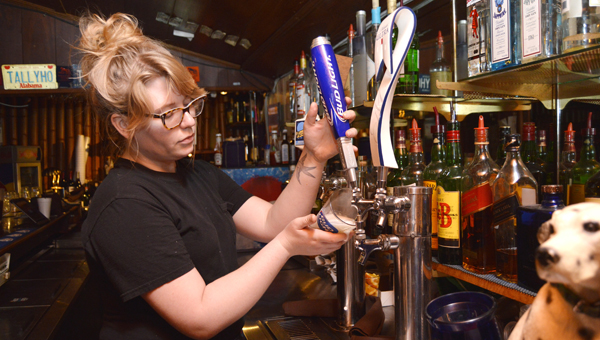 Thursday evening will be a night full of St. Patrick’s Day feasts, festivities and fundraisers. Tally Ho restaurant and Habitat for Humanity will each be holding annual fundraisers.

Since 1981, Tally Ho has been hosting its St. Patrick’s Day Benefit Dinner. Each year, a new charity or organization is chosen. This year is the Old Depot Museum.

The event will go from 5 – 9 p.m. and the bar will be open until about 10 p.m. Green cocktails and beer will be served. The full menu will be available as well as two dinner specials; fish and chips and Guinness glazed steak burger with garlic fries.

Restaurant co-owner Renee Wilkerson said the benefit dinner has been a success every year.

The night will also include a photo booth with St. Patrick’s Day props and a raffle. Local businesses and restaurants have donated to the raffle. Spivey said there will be about 10 prizes to win. She said the most unique prize is an old photograph from the museum.

“I found a glass negative and had it developed. It’s of people out working in a cotton field,” She said. “It’s really neat.”

Spivey believes the photograph was taken around 1910. Raffle tickets will be sold for a dollar each or $20 for 25 tickets.

Funds from the evening will be used to improve and upgrade the museum. Across town at the Carl C. Morgan Convention Center, Habitat for Humanity will be hosting its 13th annual Food Fest and Auction beginning at 6:15 p.m. with cocktails. Money raised will be used toward building or renovating a home for a family in need.

“We can’t build the home without the money,” said Habitat for Humanity executive director Nina Capps.

Tickets to the event are $15 per person or $25 per couple. They can be purchased in advance by contacting any board member or at the door the night of.

Local restaurants such as Tally Ho, Eve Marie’s Cupcakes and others have donated dishes to cater the event. Capps described the dinner as “a taste of Selma.”

Food will be served at 7 p.m. Once people had the chance to eat, the auction will begin. Bill Gamble will be the evening’s auctioneer.

About 28-30 packages will be up for auction, including items such as microwave ovens, oil changes and more.

“We’ve been able to put someone in a home every single solitary year for the last 13 years,” she said.