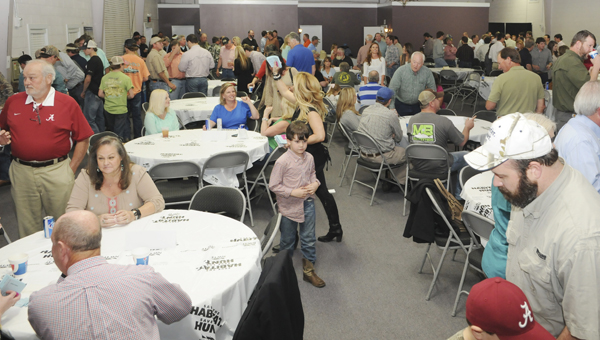 Turkey hunting season is just around the corner, which means Friday night was a time for turkey hunters in Selma to gather for some fun and a good cause.

The National Wild Turkey Federation chapter in Selma filled up the George P. Evans Reception Center Friday for its turkey banquet. The event had a silent auction, live auction and a meal for all the guests, as turkey hunters from around the state flocked to Selma to enjoy each other’s company and prepared themselves for the start of turkey hunting season on March 15.

Local banquet chairman Jere Peak said he looks forward to the banquet every year so he can reunite with old friends.

“The fun part of the banquet is to see all the different people who are involved,” Peak said.

Peak said another part of the fun in the event is all the fundraising that goes toward conservation efforts. He said 92 cents of every dollar raised at the turkey banquet goes toward good causes.

“The money that we raise here goes back in to help habitat projects,” Peak said.

At the banquet, many turkey hunters brought their entire family. Peak, who founded the NWTF chapter in Selma 27 years ago, said it’s important to him that the chapter creates a family-friendly atmosphere.

Peak said it’s always great for the turkey hunters to come together for the banquet so they can reminisce on old turkey hunting stories and make plans for the new one coming in just a few days.

“You’re born to this and it’s a disease. And once you get it, you can’t get rid of it,” Peak said.