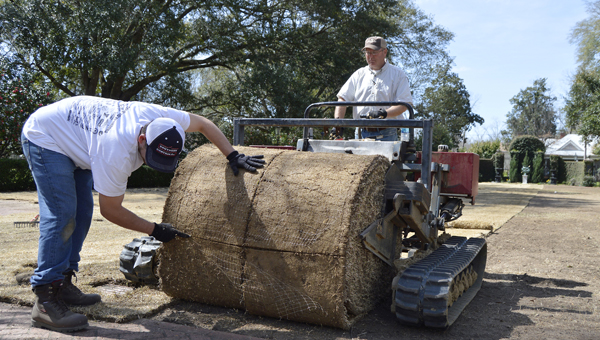 The grass will truly be greener for Sturdivant Hall Museum this spring. The museum is uplifting the back courtyard garden with new grass.

Museum director Mary Hansell said the project was a huge undertaking for the museum because it’s the first time the garden has been re-sodded since the original grass was placed.

“This is the first time ever since they’ve had grass back there,” Hansell said. “It was so uneven in lots of areas just because of the years of erosion.”

The Greek revival home was completed in 1856. Over the years, the original grass had died out, leaving mostly weeds behind. Hansell said the remaining grass developed a fungus, and it is what led them to refinish the lawn.

“It was a big huge patch in the middle of the yard out there. It was just nothing but dirt and hard. It just didn’t look very pretty,” Hansell said.

Empire Zoysia grass has been placed in the garden. The grass is a resilient, medium-textured leaf that is soft to walk on. Popular for lawns and sports fields, Empire Zoysia requires less mowing, chemicals and watering.

The new sod is currently a light brown color but will start turning green once it’s watered.

Robert Bond of Carriage Hill Landscaping said the lawn should be completely green by mid to late April and the grass will be seamless by early June.

“By the beginning of summer you wont be able to tell that we’ve been here,” he said.

The new sod is extremely tolerant to climate changes, thriving in heat and doesn’t kill during the colder months. The grass is also one of the first types of grass to return from dormancy in spring when soil temperatures reach 50 degrees, according to zoysias.com.

Hansell said even though the grass isn’t green yet, it still looks much better than it did before.