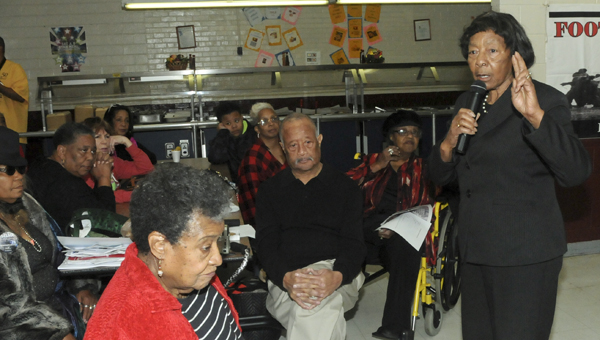 Willie Nell Fail-Avery, a foot soldier of the voting rights movement, speaks to attendees of the Foot Soldiers Breakfast on Saturday.

Those who attended heard stories from those who participated in the voting rights movement of the 1960s.

Willie Nell Fail-Avery was one who marched for equality and voting rights with Dr. Martin Luther King Jr. She said she’s always been one to speak her mind and stand for her beliefs.

“No matter the color of skin, everybody should have had the right to vote,” Fail-Avery said.

Fail-Avery talked about growing up with segregation and how wrong that was.

“I told my parents that as soon as I got to where I was able, I would do something to change the way blacks were treated. I knew we weren’t getting justice and that motivated me,” Fail-Avery said.

She said when it comes to voting, all people should exercise their right to vote and stand up for what they believe in and that young people should “take the torch and keep going.”

Lory Parks is from Detroit, Michigan and has been coming to the Bridge Crossing Jubilee for years.

“I think it’s very important that we keep this alive because the work that was done back then needs to be remembered because today we do have the right to vote and make changes,” Parks said.

Hazel Chatmon was a high school senior at R.B. Hudson when he marched across the Edmund Pettus Bridge on Bloody Sunday. He lives in Mobile now, but comes home every year for the jubilee.

“I come to see if Selma has grown from back then to now. I think it’s important for people to come here and find out about the history. When we come together like this as a people, we should leave moved and ready to take necessary actions in gaining liberation,” Chatmon said.