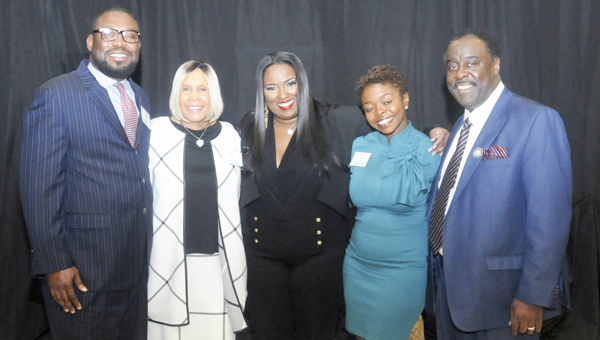 About 100 people came out to Friday’s Business Empowerment Symposium at the Carl C. Morgan Convention Center.

The event was part of the city of Selma’s “March on Selma Celebration” and an opportunity for local business owners and entrepreneurs to get tips from experts.

Montgomery is owner of the soul food chain Sweetie Pie’s. She talked about how she sang backup for many artists for 29 years before she moved back to her hometown and realized she wanted to start a business.

She said she had experience with cooking and thought it would be a good idea to start a soul food restaurant.

“I was so head strong and survival was my motivation. If I could tell my younger self something now, I would say be more informed before you attempt to go into a business,” Montgomery said.

Today there are four Sweetie Pie’s restaurants in St. Louis, Missouri, one in Los Angeles, California and another in Memphis, Tennessee. She said after 20 years of business, she still learns something new every day.

Barrett is the CEO and founder of Southern Culture Artisan Foods. She specializes in flavored pancake and waffle mixes and other breakfast food products. She said she believes being successful comes with avoiding negativity.

“I’m still navigating through the naysayers. I don’t think it ends. I try to equip myself with more tools and ammunition so that when the bullets are coming, I’m bullet proof,” Barrett said.

She said she has dreams to open a breakfast chain in the future.

Hightower is president of Hightower Petroleum and talked to the audience about knowing when to make sacrifices and how to strategically run a business.

“You don’t have to do everything, but you have to be smart enough to know what you need and how to go get it,” Hightower said.

He encouraged the audience to go after their dreams.

Councilwoman Angela Benjamin said the city council thought a symposium would be a great event for Selma’s business community.

“One of the things that would help any city thrive is having businesses all over the place. In Selma, our driving force is local businesses. It is good if we can have professional development symposium for those business owners,” Benjamin said.

She hopes the symposium will be a recurring event for the city of Selma.