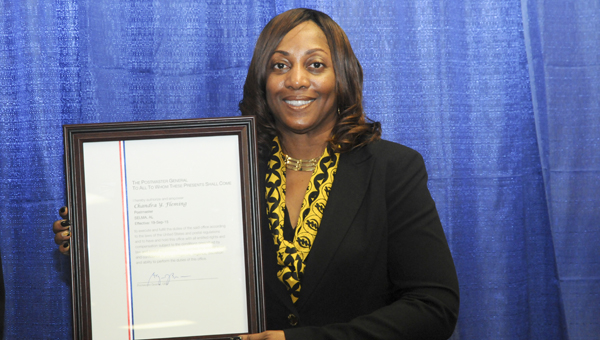 Chandra Fleming was recognized as the first African-American female postmaster of Selma during an installation ceremony Friday.

The first African-American female postmaster of Selma was officially installed Friday at the U.S. Post Office.

Chandra Fleming has been a postal service employee at a variety of different locations for 30 years. She is a native of Atlanta, where she spent many years working at Cascade Post Office before deciding to move to Selma last October.

“As a post master here in Selma, I oversee the distribution and processing of mail on a daily basis. We deliver mail to every household in this area and also Tyler and Sardis locations,” Fleming said.

She said it is a humbling experience to be the first African-American female postmaster of Selma and when she took the job back in October she didn’t realize at first that she had made history.

“I feel very privileged in this moment. Selma has such a rich history and for me to be able to say I am now apart of that history is just overwhelming,” Fleming said.

She said she wanted to come to Selma to be a part of a community she saw as historic and a job less hectic than the one she had in Atlanta.

During Friday’s ceremony, Fleming was also inducted into the local chapter of African-American Postal Employees United for Success, an organization within the post office that helps to mold African-American employees and others who want upward mobility through postal service careers.

Family, friends and colleagues shared memorable times and their best wishes to Fleming on her new endeavor.

Mike Kolmetz is the postmaster at the Andalusia post office, but was once the manager of operations and the person who hired Fleming in October. He said her experience and interviewing skills were two things that made her stand out from other applicants.

“She was very sure of herself. Since she has been here, we’ve seen the Selma post office be successful in multiple functions. She is dedicated, honest and for the company,” Kolmetz said.

Janet Turner is a friend and ex-coworker who worked with Fleming at Cascade. She said she has seen her friend climb the ladder of success with the United States Postal Service.

“When we first met, we were both city carriers for Cascade in Atlanta. She became my supervisor and later became my manager. We are very close friends. I have known her for over 20 years. She is a hard, no-nonsense worker,” Turner said.

Fleming said she feels like the first-time experience of being a postmaster will be like none of the other positions she has held in postal service.

“My goal here is to make sure I represent the postal service overall, not just being African-American but being a postal employee. I want to make sure that the citizens of Selma get great mail service,” Fleming said.