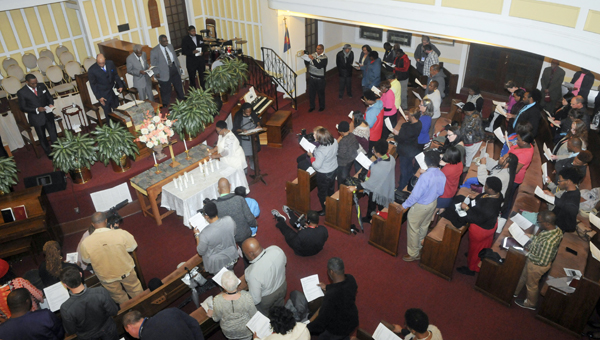 A mass meeting was held Thursday at Tabernacle Baptist Church, a nod to the church meetings of the voting rights movement.

Hundreds of community members and visitors had an opportunity Thursday to see what a mass meeting from the voting rights era was like at Tabernacle Baptist Church.

The annual mass meeting is a tribute to the church meetings that were common in the 1960s at Tabernacle and other Selma churches.

It was during these meetings that details of the voting rights movement were planned. Dr. Martin Luther King Jr. also held many of his planning meetings at Brown Chapel AME Church.

Board member of the Selma Center for Non-Violence, Truth and Reconciliation Malika Fortier volunteered to help with Thursday’s program and said she feels like the reenactment of mass meetings is important to have during the jubilee.

“I think it is extremely important that we remember the sacrifices of those people who participated in Bloody Sunday, in marches and all other actions they took. This is a great way to have people remember that,” Fortier said.

The meeting took the time out to remember civil rights activists who have passed on. Amelia Boynton Robinson, Washington Booker III and Anna Taylor were a few who were honored for their work.

Alabama State University professor Dr. Robert White was the speaker for the program and musical groups like The Freedom Singers and the Selma High School Choir sang old spirituals.

She said she hoped people who attended took away a great experience and understood the importance of embracing history and realizes the role it plays today.

“I hope people will remember what those before us gave and be inspired to continue the work they started,” Fortier said.