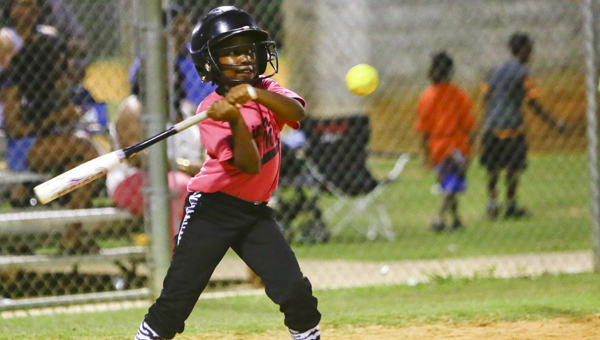 Haley Jackson swings a bat during a youth softball game last summer. The Dallas County Commission approved the construction of four batting cages at the Sportsplex on Feb. 22. The cages will be ready for the start of the youth baseball and softball seasons, which are set to begin the first weekend in April.

The city of Selma’s youth baseball and softball seasons are about a month away, but the players and coaches already have something new to look forward to.

The Dallas County Commission approved construction of four new batting cages on Feb. 22, a project that will cost $6,439.22. The cages will be installed at the Sportsplex, where many youth games take place during the spring and summer.

The idea for the construction of batting cages was proposed in mid-January, and it only took a few meetings before the plan was approved.

Dallas County District 4 Commissioner Larry Nickles was one of the commissioners who was behind the proposal from the beginning. He said it was a dream come true seeing the plan approved so quickly.

“I’ve been a volunteer coach for the city rec department for over 40 years, and I’ve always wanted to see this done,” Nickles said.

The construction is set to begin next week, and Selma Recreation Department director Lebo Jones said he expects the batting cages to be ready by March 20. That gives enough time for youth leagues to be able to use the cages for practices before the season begins the first weekend of April.

One reason Jones felt it was necessary to build batting cages at the Sportsplex was to make the city more appealing for other teams to visit for tournaments. Jones said every other city that hosts baseball tournaments has batting cages, and it is something he believed Selma needed as well.

“We’ve done everything we can to upgrade our facilities and be comparable to other cities around us,” Jones said.

Another benefit of the batting cages is allowing games to start and end in a timely manner. When teams are able to warm up in the batting cages, they don’t need to spend as much warm-up time on the field before the game.

Nickles said the cages will also provide a safer environment for the fans who attend the games. Without the cages, Nickles said the balls are constantly being hit and thrown all around the park.

“It’s going to be an amazing improvement on our safety, as far as injuries, and it’ll also improve the time when each team gets five minutes to warm up,” Nickles said.

Tellier said he’s talked to coaches about the construction of the cages, and they are all looking forward to the changes.

“It’s not costing the city anything, so we were pumped about it and excited about it,” Tellier said.

While the addition of the batting cages will provide the youth baseball and softball leagues with plenty of benefits heading into a new season, Nickles said he hopes this isn’t the last improvement that is approved for the Sportsplex this year.

“The next project I have in mind is to get some type of shade over these areas where people can sit and watch ball games,” Nickles said. “It gets tremendously hot out there in midday and the late afternoon in the summertime.”