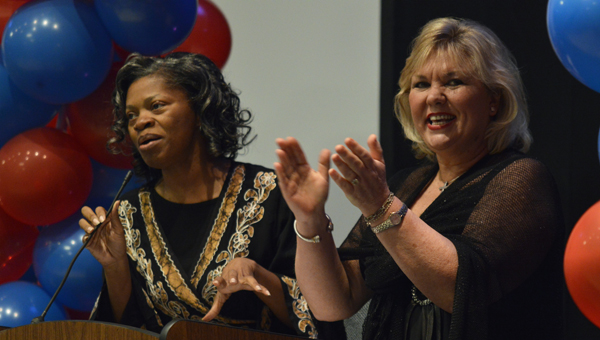 The city of Selma welcomed visitors to Selma with a reception Thursday at the Carl Morgan Convention Center.

Mayor George Evans said the welcome reception was free and open to anyone. The event is the first of several the city of Selma has planned for this weekend.

“I think that it’s thrilling that this is open to the general public,” said Edie Jones, a Selma resident. “I think that anyone should feel welcome here.”

In the center of the room, fruits, cheese and desserts were served. Red and blue balloons were arranged throughout the room. R. L. Lewis Jazz Band provided live music and a photo booth was set up on the far left side of the room for guests.

Attendees came and went but maxed out at approximately 200 people at 6 p.m.

Selma native Regina Woodson said she participated in the 1965 marches as a 15-year-old and has been participating in the annual commemorations ever since.

Just after 6:30 p.m., Valorie Lawson, WSFA 12 news anchor, approached the podium. She acted as the master of ceremonies for the evening.

In honor of this year’s theme, Lawson encouraged everyone to use #IBelieveInSelma for all of their social media posts throughout the weekend.

Jones is thankful for all the hard work Evans and the city has done to make the annual celebrations possible.

“I’m excited about what the city of Selma has planned,” Jones said.

Woodson said it’s a blessing she has been able to celebrate 51 years of voting rights. She said it’s important for people to come back to Selma.

“Always remember how we got where we are,” Woodson said.

A mass meeting was held Thursday at Tabernacle Baptist Church, a nod to the church meetings of the voting rights... read more