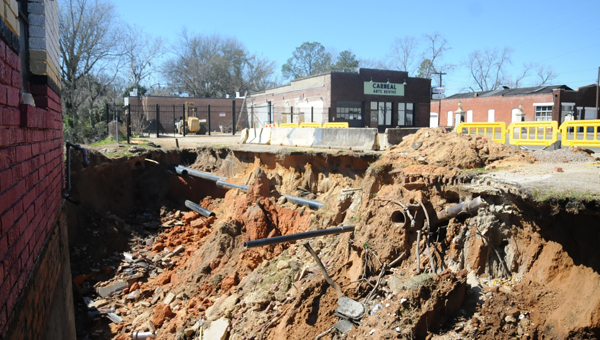 Repairs are soon to begin on repairing erosion along Water Avenue.

Repairs to correct erosion at the corner of Water Avenue and Church Street next to the Alabama River are going to begin in the coming weeks.

Part of the riverside caved in the fall of 2015, causing erosion to the river and damage to drain pipes. City contract engineer Ray Hogg said work is scheduled to begin in a couple weeks following a bidding process and a city council meeting.

There are four potential bids on the project. They will be presented at City Hall Thursday at 2 p.m.

On Tuesday, Hogg will take the bids to the city council meeting, and he expects work will start on the damaged road soon after.

“If the council will approve the bids next Tuesday, I anticipate the following week some activity to begin,” Hogg said.

Hogg said he believes the work on the road can be finished in 30 – 45 days, depending on how much bad weather Selma experiences during that span.

He said the first goal is to reconstruct the drainage pipes. The pipes will be 48 inches in diameter and just under 100 feet in length.

“The most important part will be done first and that will be getting the pipe in there and getting everything stabilized,” Hogg said.

To keep drivers safe and prevent them from running off the roadway into the Alabama River, there will be a permanent wall built. It will be a 10-foot high retaining wall that replaces the concrete barricade that stood there prior.

In addition, a curb and gutter will be installed with two curb inlets.

Hogg said he didn’t have any details on who the four potential bidders would be on Wednesday. Regardless of which bid is chosen, Hogg said the road needs to be repaired as soon as possible.

“It’s not going to get any better. If we don’t start immediately and stabilize it and repair it and bring it back to an acceptable condition, then it’s going to get worse,” Hogg said.