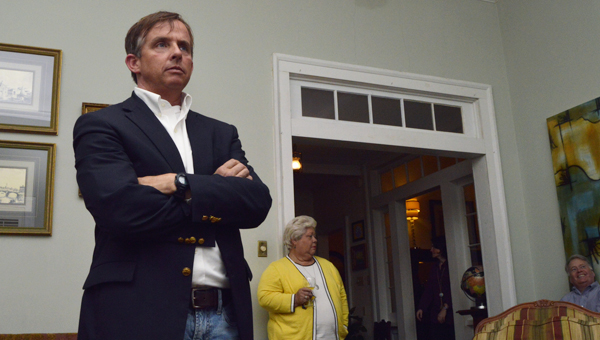 Don McMillan waits for poll results at his home in Marion with close friends and family. –Emily Enfinger

Editor’s Note: The story was updated at 1 p.m. Wednesday to include final unofficial numbers.

“I’m quite pleased, quite happy,” McMillan said. “It was a good run and certainly the judge circuit had two good candidates to choose from so it was a very hard work on both sides.”

Final results were also available for Bibb County, where McMillan nearly doubled up Garner 706 to 376. Wilcox County was also a big win for McMillan, as he got 2,337 votes to 999.

In Hale County, McMillan won a close race with 1,473 votes to Garner’s 1117. Final numbers from Hale County were not available until Wednesday morning.

McMillan watched the polls from his home in Marion, surrounded by his close friends and family.

“It’s like a job interview with everybody in five counties. It’s a good thing; it’s a good experience,” he said. “You get to meet a lot of good people and establish friendships that are long lasting.”

McMillan graduated from Troy University in 1992 with a Bachelor’s of Science degree in political science. He attended Faulkner University’s Jones School of Law and graduated in 1996. He passed the state bar the same year.

Afterward, he served as a judicial law clerk of the United States Bankruptcy Court for the Middle District of Alabama.

McMillan continued his public service as prosecutor in January 2000 for the Fourth Judicial Circuit of Alabama. Four years later he became assistant attorney general for the state of Alabama. He was elected as district judge of Perry County in 2006 and has served ever since. He and his wife Jennifer have been married for 20 years and he has two sons: Knox, 16, and Hardy, 11.

McMillan is thankful for the support he has received during the election.

“I thank everyone for voting for me. I appreciate everyone’s support and look forward to serving the fourth circuit as your circuit judge,” he said.

His six-year term will begin in January 2017.

Garner said she has learned a lot over the past year being her first race for any political office and is thankful for all of the support she has received.

She believes she ran a successful campaign regardless of the outcome of the election because of the knowledge and experience she has gained.

Keith falls to Sacred Heart in thrilling 1A semifinal