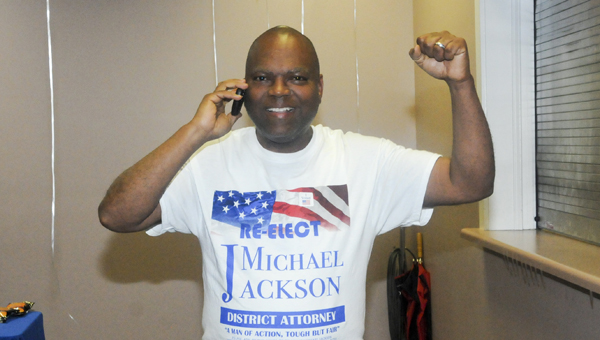 Editor’s Note: The story was updated at 1 p.m. Wednesday to include final unofficial numbers.

Michael Jackson will serve his fourth term as the district attorney for the fourth judicial circuit after winning Tuesday’s race against Faya “Rose Sanders” Toure.

“I am humbled by the fact that voters gave such a large victory in all five counties,” Jackson said.

In Hale County, Jackson had a 127 to 90 vote lead with 12 precincts left to be reported. When final numbers were available Wednesday morning, his lead grew in Hale County to 1,512 votes to 1,038.

Jackson said he plans to continue to work toward ending gang violence within the counties he serves.

“Gangs and bullying are two things I would like to focus on,” Jackson said. “We have a huge problem with gangs in Dallas County and also some of the surrounding counties in my circuit.”

Toure centered her campaign on equal sentences for all, but came up short in the election. She said she had reservations about running and only entered the race because she did not want Jackson to run unopposed.

“The last thing I wanted to be in life was a district attorney. I never thought of it. Before making the decision, I tried desperately to get other people to run. I figured for him to go unchallenged would be a disservice to citizens,” Toure said.

She said her overall experience of campaigning was a good one.

“I enjoyed meeting and talking to people. I think it was worth it. To be welcomed by people saying `I’m with you` it was very encouraging to me.  I did the best I could and my whole purpose for running was not to just to win, but to change,” Toure said.

Jackson has been a district attorney for over 11 years and serves on the executive committee of the District’s Attorneys Association. He held the office of Selma Municipal Judge from 1995 to 1998. He also has served as an assistant district attorney,  a private practice attorney where he focused on criminal law and a municipal court judge.

Curtis Williams sits with his wife Jerolene Williams at the St. James Hotel shortly after he found out he had... read more