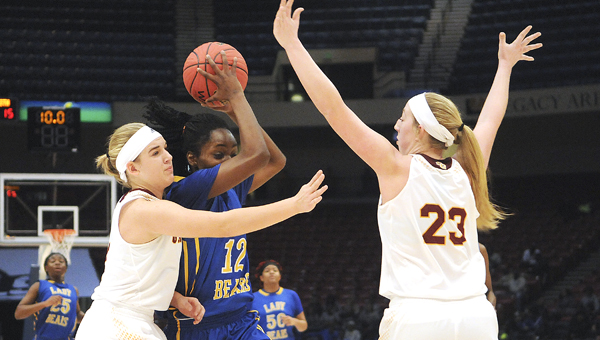 Keith’s Harriet Winchester was double teamed throughout Monday’s 50-34 loss to Spring Garden in the 1A girls state semifinal in Birmingham. –Daniel Evans

BIRMINGHAM —  There will be a new 1A girls champion this year.

Spring Garden (30-4) ended Keith’s reign with a 50-34 win in one of Monday’s two class 1A finals at the BJCC in Birmingham. The Panthers double-teamed Keith seniors Harriet Winchester and Zykia Pettway and it had the Bears out of sorts on offense.

Spring Garden took a 16-2 lead and led by four or more the rest of the game.

“It was the same game plan that Loachapoka had last week. We just never settled ourselves in to play our game,” said Keith coach Cecil Williams.

Both teams struggled during the first few minutes of the game, which was a rematch of last year’s 1A championship game. Keith won last year’s title game 38-25.

It wasn’t until Savannah Dempsey’s layup with 5:12 left in the first quarter that either team scored. Keith didn’t score its basket until nearly seven minutes into the game, when Zykia Pettway’s turnaround jumper rolled in.

Other than that, the first 11 minutes of the game was all Spring Garden. Madison Sides made a 3-pointer to end the first quarter and Dempsey knocked down a three to begin the second as the Panthers took a 14-pont lead.

“We didn’t want to come out and show a double team on [Winchester]” said Spring Garden coach Ricky Austin. “But we were really trying to double team her.”

Ambreya Snow as often the uncovered player in Spring Garden’s defense, which often had two of the trio of AJ Broome, Payton McGinnis and Kerstin Bryant on Winchester, and she took advantage. Snow made two second quarter 3-pointers as the Bears cut the deficit to 18-13.

Every time the Bears got close, Spring Garden hit a big shot.

Broome knocked down a 3-pointer to make it 21-15 and the Panthers took a six point lead to the locker room.

Pettway’s layup to begin the second half pulled Keith (31-3) within four, but Spring Garden answered with a 7-1 run. Sides made a 3-pointer and Tykeah Rogers dominated the inside throughout the second half. Rogers led Spring Garden with 23 points and 15 rebounds in the game.

Austin also credited Rogers with slowing Pettway, who had a double-double in last season’s championship game.

“I thought that was key because she really hurt us down here last year,” Austin said. “We didn’t have an answer for her.”

Winchester had to make a deep 3-pointer just to pull Keith within 39-27 in the final seconds of the third quarter.

The defending champions didn’t have another run in them. Winchester made a coast to coast layup and later added a 3-pointer to make the score 44-34, but that was as close as the Bears would get the rest of the way.

Winchester scored 17 points on 7-of-16 shooting for Keith. Snow’s six points were second in line for the Bears, who shot only 35 percent from the floor.  Spring Garden also outrebounded the Bears 36-19 in the game.

“In this situation, where you only have two games out, you’ve got to throw everything out there,” Williams said. “We made mistakes tonight and Spring Garden capitalized off of them and they played better.”

The loss ended the run of one of the winningest girls’ senior classes in Keith Middle/High School history. Seniors Winchester, Pettway and Qumilia Johnigan were leaders on a team that was making its third appearance in Birmingham in the last four years.

Spring Garden will play Linden Thursday for the state championship.

Morris Collins making a difference on the court

At 6-foot-5 and 310 pounds, Morris Collins is known for his contributions on the football field. But his presence on... read more