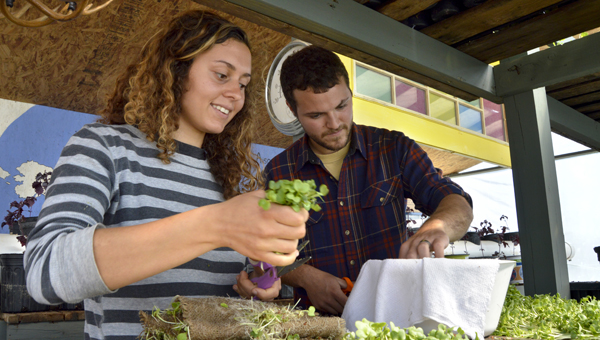 Spencer Farm has some new faces as they welcome a couple from Louisiana this season.

Chaz, 23, and Victoria, 20, Jones are originally from Lafayette and came to Marion Junction under the World Wide Opportunities on Organic Farms (WWOOF) program.

It wasn’t but a few nights at the farm when they fell in love with it and decided to stay when offered garden manager jobs.

“It was just a match made in heaven and they agreed to stay on for the season,” said farm owner Chip Spencer.

The young couple has been farming for only two years, but their interest and passion for sustainable farming goes beyond that. They began WWOOF to pursue their dreams.

Chaz said the reason they came to Spencer Farm is because it’s a model of how they want to operate as future farm owners as well as the positive reviews given by previous interns. He said sustainability and operating under the Community Shared Agriculture (CSA) network are important factors for him and Victoria.

“We actually only intended to stay three weeks” he said. “We really caught on with their vision.”

Spencer describes the program as an incubator for young farmers to develop their knowledge and skills without the stress of actually owning a farm.

“They can learn the in’s and out’s of making a business out of this under our umbrella of protection of I’ve got the farm, I’ve got the equipment and I’ve got the customer base,” he said.

WWOOF is in participation with 2,010 farms across the world. With an expanse of farm types in the program, members have the opportunity to learn skills such as growing vegetables, bee keeping, working with animals, making wine and more.

The farm began participating with WWOOF three years ago. Since then, it has had interns from 25 states and seven foreign countries. Six interns currently work at the farm. Spencer said over the past couple of years, he has worked on expanding the facilities to attract bright young farmers from outside the region to bring in different and new knowledge and experience.

“We finally got it to the point that we can attract some people like Chaz and Victoria to come here see what we’ve put into place and have the means for them to be very successful vegetable growers here in this black belt soil type,” he said.

The couple will be in charge of working on multiple tasks throughout the farm and seasons. One project they are currently working on is planning for this season’s farm share, CSA, which will be open for signup in the next few days.

Because the couple worked two years at a larger CSA farm for two years, Spencer expects their experience to make this year’s farm share better than before.

Victoria said the connection made with people by growing for the community makes the work meaningful and important.

“We are excited to feed the people of Selma and we can know them. I love that,” she said.