Morris Collins making a difference on the court 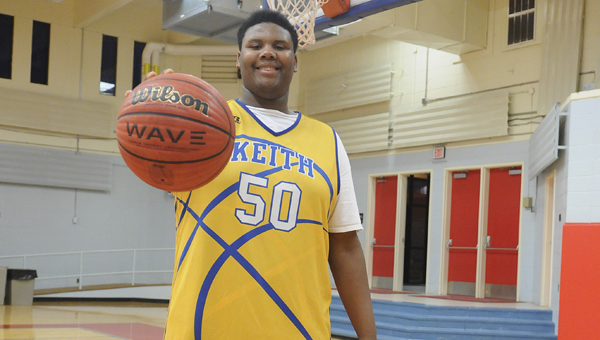 At 6-foot-5 and 310 pounds, Morris Collins is known for his contributions on the football field. But his presence on the basketball court has also been felt. — Daniel Evans

Football is Morris Collins’ favorite sport and it’s easy to see why. Listed at 6-foot-5, 310 pounds on the Bears’ football roster, his large frame allowed him to throw around defenders and open up holes for Keith’s Wing-T rushing attack.

The senior has multiple offers to play college football and is still trying to decide where he’s going to attend school. In the meantime, he’s trying to help Keith’s basketball team win its first boys championship since 1998.

A few years ago, he probably couldn’t have imagined himself playing basketball.

“At first I didn’t really like basketball,” Collins said. “I didn’t really know how to play without fouling. I always played too rough because I was used to football, a game where you can have collision and contact.”

Collins didn’t even really play basketball until his junior season. He left the team during his sophomore year, although coaches and players joke that it was for different reasons. Collins said he quit playing because he wanted to focus on his schoolwork, but head coach Tommy Tisdale said it’s because the big guy suffered a “routine finger sprain.”

Whatever the reason, Collins didn’t find his love for basketball until his junior season, when he got into the kind of shape required to play Tisdale’s aggressive style and found a role in Keith’s regular rotation.

“Coach said he could use me and thought I’d be pretty good,” Collins said.

During his senior season, Collins has made a real difference for the Bears.

He made a game winner in the final second against R.C. Hatch in November and had a career night against Southside a few weeks later. Against the Panthers, he posted 18 points and 11 rebounds in a 65-48 Keith win.

After that game, Tisdale praised Collins for his effort.

“If we had a game ball, we’d have to put it in his hands tonight,” Tisdale said.

While scoring often gets a lot of the attention, Collins is making a difference in other ways.

During last week’s Central Regional games in Montgomery, he had 19 rebounds in 23 minutes of play.

Despite his success on the hardwood, Collins said football is still the sport he enjoys playing the most. He has offers to Fort Valley State in Georgia and Central State University in Ohio. Right now, he said he’s still mulling both offers, but he’s also drawing attention from junior colleges.

However, that’s probably in the back of his mind. Collins said right now he’s focusing in on trying to lead the Bears to the 1A state title.