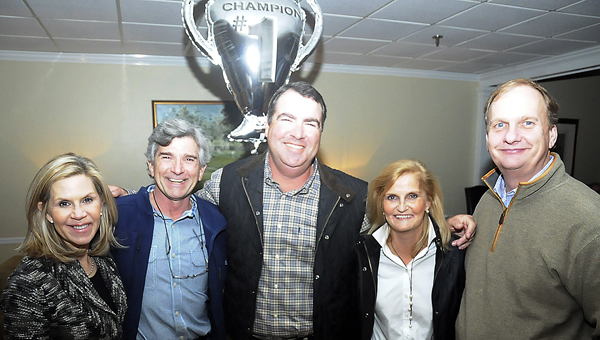 After spending many years serving an integral role in the development of tennis players around the area both young and old, Stinson still wondered if guests had showed up to the Selma Country Club Thursday night just for the free food.

The Selma Country Club held a celebration for Stinson Thursday to congratulate him on being named the tennis professional of the year by the United States Tennis Association’s Alabama Awards Committee.

Among the 50-plus guests who showed up to support Stinson at the Country Club was Donnie Ellis, the director of tennis at the Selma Country Club who has known Stinson since his days playing high school tennis at Morgan Academy.

“My relationship goes a long way back with him,” Ellis said. “I helped coach him when he was on the high school team. He’s become a really great player and also he’s become a great professional.”

Ellis said part of Stinson’s success as a coach stems from his likeability and ability to get along with everybody. In addition, Ellis said Stinson doesn’t coach from the sidelines.

Whether Stinson is teaching a ladies clinic at the Country Club or preparing his Morgan boys and girls team for a match against a county opponent, he isn’t shy about getting on the court and showing his students how to improve rather than simply telling them.

At Morgan Academy, Stinson has coached multiple teams to state championships. Ellis said Stinson’s success coaching at Morgan has made the tennis team a competitive one to make with so few spots on the roster.

As the only high school tennis program in the area, Ellis said it’s something many kids look forward to playing on for years before they reach the high school level.

While Stinson already has plenty on his plate, Ellis said Stinson is still trying to improve in every tennis job he has.