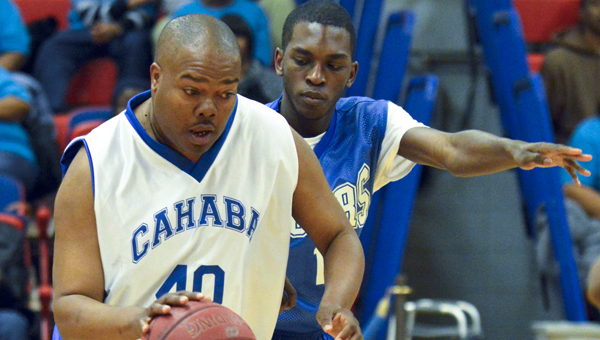 Cahaba Center’s Greg Walker (40) dribbles past a defender in the first half against Montgomery TRC Tigers during the Special Olympic Basketball Classic on Friday.

Lafon Barlow, Cahaba Center executive director, said players told her they couldn’t sleep because they were too excited about the games.

“With track and field they wear their medals for months,” Barlow said. “With this they talk about it for months.”

Cahaba Place and Cahaba Center teams have been preparing all year for the classic.

Shariline Norfleet has been a participant of the Special Olympics basketball games for many years. This year she can’t play because of a foot injury, but still came to support her team and to help as coach.

“I hope the teams do the best they can and try to win us first place,” Northfleet said.

Players were awarded participation certificates after each game.

Barlow said the games are less about winning and losing and more about having fun. The Dallas County High School student council, varsity basketball, cheerleaders, band and safe school as well as the Morgan Academy student government association came out to support players in the games.

Barlow said the players have always been excited to play the games, but having the music and student supporters adds to the excitement.

Tracy Vaughn has been coach for the Cahaba Center for five years.

“I think this is the biggest attendance I’ve seen,” Vaughan said.

Roughly 100 family member and supporters were in attendance.

Teams will be advancing to state competition in Dothan on March 10 and 11.