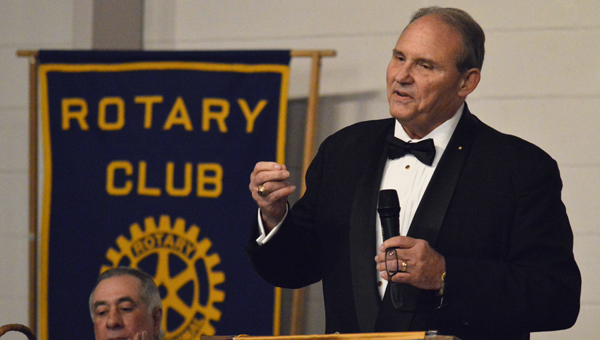 The Rotary Club of Selma celebrated 100 years of service Thursday night with a black-tie event at the Evans Reception Hall.

Bob Kelley has been involved with the club for 22 years, both locally and at a state and national level. He said for the club to make it 100 years shows its importance in the community.

“I think it says that it’s a worthwhile organization, that it’s been committed to do good works in the community,” Kelley said. “Our motto ‘Service Above Self’ is never going out of style.”

The evening kicked off with an hour-long reception. During that time, a slideshow displayed photos and newspaper clippings from the club’s history.

“Tonight is a gathering of friends and of people who have been involved in Rotary… this is kind of like a class reunion,” Kelley said.

Approximately 200 people were in attendance. At 7 p.m.. guests were asked to find their seats for dinner and a program.

Rotarian Susan Keith sang, “Somewhere over the Rainbow,” acapella and had the audience join her.

She has been part of the club since 2008 but has family roots in the organization going back several generations. Her brother, Joe Saloom, served as master of ceremonies.

Cavan opened with several jokes and then gave some history about the club. Paul P. Harris founded the organization with the Rotary Club of Chicago in 1905.

Eleven years later, 15 businessmen and professionals would meet together at Hotel Albert. A few months later the Rotary Club of Selma was chartered.

Today there are 1.2 million members of the organization worldwide with a common interest to better serve the community and the world. One main focus of the club is the fight against polio.

Kelley said the club will continue its work in the community and is seeking other like-minded individuals to join the group.

Searcy said it means a lot for people to come out and celebrate the anniversary.

“There is so much going on in Selma and for people to take the time to come here and be with us means a lot,” Searcy said.

Immediate past club president McNair Ramsey was honored for his work as 100th anniversary committee chair.

Gallery 905 celebrated its grand opening with a ribbon cutting Thursday with friends from the Selma and Dallas County Chamber... read more