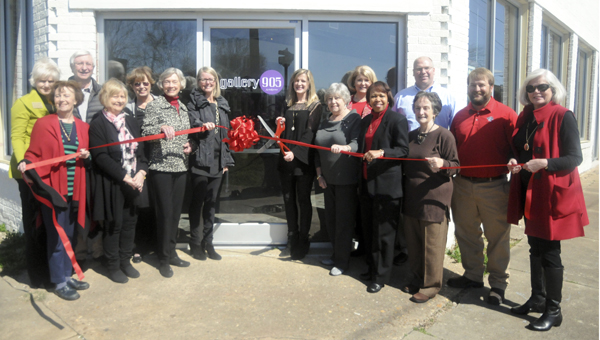 Gallery 905 celebrated its grand opening with a ribbon cutting Thursday with friends from the Selma and Dallas County Chamber of Commerce.

Gallery 905 held a grand opening for its supporters Thursday evening.

The gallery opened in November and December under a temporary business license and operated as a pop-up gallery for five weeks.

In early January, the gallery closed for final renovations and then reopened with a soft opening on Feb. 11.

The grand opening was a semi-formal event held in celebration for the donors for helping ArtsRevive make the gallery possible.

The event was held from 5 – 7 p.m. with about 100 people in attendance. Hor d’oeurves and beverages were served.

Kristen Jones, gallery assistant manager, said she is glad the gallery is finally open for good.

Since closing in January, the gallery added 10 new artists to the 30 existing regional artist represented. Becky Youngblood, manager, and Jones also replenished popular items as well as brought in new inventory of existing artists. Works range from glass to ceramics and paintings to photography.

“I think it is a wonderful addition to Selma,” Patty DeBardeleben said. “We’re big supporters of ArtsRevive.”

She and her husband, Caldwell, have been supporters of the non-profit since the group began.

The gallery, located in the Cammack Building on Water Avenue, will include artist workspace in the back of the building in the future.

The progress of the workspace is dependent on the success of fundraising with ArtsRevive as part of their three-phase capital campaign, “The Time for Selma is Now.”

Andy Stewart, Trustmark Bank president and donor, believes the gallery opening will bring momentum with the revitalization of downtown.

“Hopefully, this will create some momentum downtown where other people would want to move their businesses downtown,” Stewart said.

He said the history of downtown is a major asset to the area and people should embrace it.

For more information about the gallery, call 878-1905 or visit its Facebook page, Gallery 905.

amyah Johnson stands in her family’s burned out living room. The 8-year-old woke her mother and saved her two siblings... read more