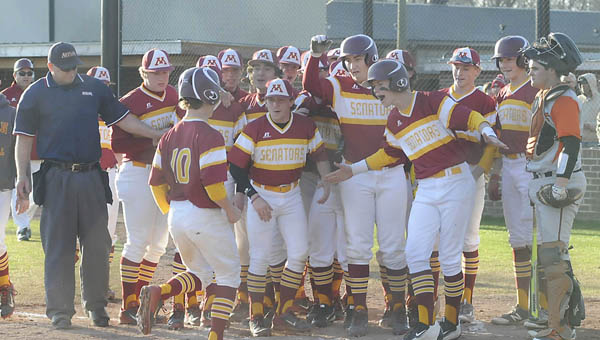 Morgan Academy teammates wait at home plate to celebrate Brayton Brown’s two-run home run in the second inning of a game against Monroe Academy. The Senators lost that game 6-2, but won earlier in the day against Pike Liberal Arts School 7-1. — Justin Fedich

Morgan split two contests Thursday on the first of three days of the inaugural Elton Reece Pepsi Classic. The day started out strong for the Morgan Academy Senators (3-3), who blew past Pike Liberal Arts School 7-1, but Morgan fell to Monroe in the nightcap 6-2.

In the opening game, Jackson Henderson threw 60 pitches to hold off the Patriots, while the bats were hot for the Senators. Brayton Brown led the way offensively for Morgan in game one. He got on base three times with two hits and a walk.

In the second game of the day, Morgan got down 1-0 early but quickly grabbed a lead in the bottom of the second inning.

The Senators couldn’t hang on to the lead for long, as the Volunteers scored three runs off back-to-back home runs off Price to take a 4-2 lead in the top of the third inning.

“Give up two home runs in the third inning. That will hurt you a little bit,” Carter said.

Woodham Kemmer came in midway through the top of the inning in relief for Price and closed out the inning.

Kemmer wasn’t able to keep Monroe away from home plate for long, however. After a scoreless fourth inning, the Volunteers added two more runs in the top of the fifth inning to pull ahead 6-2.

The Senators were unable to find the offense late in the game to make a comeback.

“Overall, I was proud of my guys. They fought, played hard. That’s all we can expect,” Carter said.

The Elton Reece Pepsi Classic will continue the next couple days with softball starting up Friday at the Sportsplex.

Morgan’s baseball team has an off day Friday, but returns to action Saturday to play another pair of games. Morgan faces Kingwood Saturday at 10 a.m. and Marengo Academy at 2 p.m.

Both games will be played at Morgan’s home field. There will also be games played throughout Saturday at Bloch Park.

Last Saturday, the Selma Parks and Recreation Department and All in Sports Outreach held a baseball camp for the city’s... read more