Keith girls, boys each win to earn trip to Birmingham 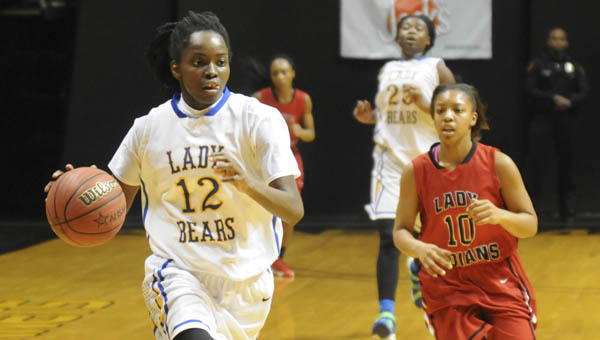 The defending state champions rallied from 11 down to beat Loachapoka 53-43, the second straight year Keith (30-2) had to storm back from double digits down to beat the Indians in Montgomery. It was the fourth consecutive season the teams had met at Alabama State University’s Dunn-Oliver Acadome, and the rivalry again didn’t disappoint.

“It’s not about the way you start but how you finish,” said Keith coach Cecil Williams. “It seems like every time we play Loachapoka there’s something about them that we start off in the hole.”

Harriet Winchester made two 3-pointers in the third quarter to give Keith its first lead of the game. Loachapoka fought back to lead 39-36 after the third quarter, but Keith outscored the Indians 17-4 in the final quarter.

Winchester was named Central Regional MVP for the third time in four seasons. Teammates Zykia Pettway and Shatavia Moore joined her as Keith representatives on the all-tournament team.

“I think we were anxious,” Winchester said of her team’s slow start.

The Bears trailed 15-4 midway through the first quarter and could get nothing going on offense. Pettway knocked down two short shots inside and Winchester split double teams to get to the rim to help the Bears trim the deficit to 15-11 by the end of the first quarter.

“I knew the clock hadn’t stopped running so we wouldn’t stop playing,” Pettway said of her team’s early deficit.

Loachapoka fought back in the second quarter. The Indians regained a nine point lead before Keith closed the half on a 8-0 run to get within 22-21.

The second half started with a technical foul against the Bears for not getting out of the locker room quickly enough. The clock to begin the second half had expired by the time Keith got to the court.

Winchester, who scored 22 points in the game, made the second of her two third quarter 3-pointers to put the Bears ahead 34-33. Although it was an important momentum swing, Loachapoka took a 39-36 lead into the fourth quarter after a Tykeriya Clemons steal and layup in the final minute.

Pettway knocked down two free throws and Alyshia Boone, who led the Bears with nine rebounds, completed a 3-point play to put Keith in front for good. Winchester drove for a layup and made a short jumper in the next couple of possessions to stretch the Bears’ lead to seven.

Loachapoka made one final run after getting within two on a jumper by Normesha Pits, but Moore and Boone closed it out at the free throw line.

“Everybody this year that we’ve played has been trying to knock us off,” Williams said. “Giving us their best shot, double teaming [Winchester], double teaming [Pettway], trying to press us and doing everything they can. They never broke their composure, never got frustrated and continued to play our game. That kind of consistency in your team is hard to beat.”

Moore scored 12 points for Keith and Pettway added another 10.

Keith’s next game will be in Birmingham Monday against Spring Garden at noon in the class 1A state semifinals. It’ll be a rematch of last year’s state championship game.

John Pettway scored 34 points and Keith blew out Cornerstone School 73-47 Thursday to make it to Birmingham for the first time since 2011.

Cornerstone went into halftime on an 11-0 run to get within eleven, but the Bears (27-6) outscored the Eagles 20-2 in the third quarter to turn the game back into a blowout.

“Coach told us they were the only thing in our way to go to Birmingham,” Pettway said. “In the locker room at halftime, he told us the score was 0-0.”

The Bears played like a team hungry in the second half.

For the second straight game, Keith used its size to dominate its opponents on the boards. The Bears won the rebounding battle 46-26 and forced Cornerstone into 18 turnovers.

“We probably are going to outsize a lot of people,” said Keith coach Tommy Tidsale. “We have to take advantage of it.”

Only thirty minutes down the road, they had to turnaround after the game was postponed until Thursday due to severe weather.

Tisdale said the team saw it as a second chance.

“It gave us a better day of practice,” Tisdale said. “I think we were prepared to come up and play the other day, but the practice before wasn’t the best. If [William Stanford] was going to play like he did tonight, if we’d played Tuesday, we’d probably be at the house.”

Stanford scored 30 of Cornerstone’s points in the game on 9-of-22 shooting. He was the only player for the Eagles in double figures.

He helped lead the 11-0 run before halftime that pulled Cornerstone within 39-28, but Keith ended that run quickly in the second half.

Jimmie Powell made back-to-back layups to make the lead 19 and Morris Collins knocked in a turnaround jump shot to keep the lead growing.

Pettway took over from there, making a shot and a 3-point play to make Keith’s advantage 57-30. Powell tipped in a shot to beat the third quarter buzzer to extend the lead to 29.

In the fourth quarter, many of the Bears’ younger players got to get in the game as Keith held on for a dominant win.

Pettway was named the tournament MVP. Johnson and Powell also made the all-tornament team for the Bears.

Next up for Keith is a meeting with defending champion Sacred Heart, which has been No. 1 in class 1A all season.

The Cardinals have averaged 99 points per game over their last three games.

“The most important thing I know about them is they’ve got to play us,” Tisdale said.

Keith will play Sacred Heart Monday at 1:30 p.m. in Birmingham at the BJCC.