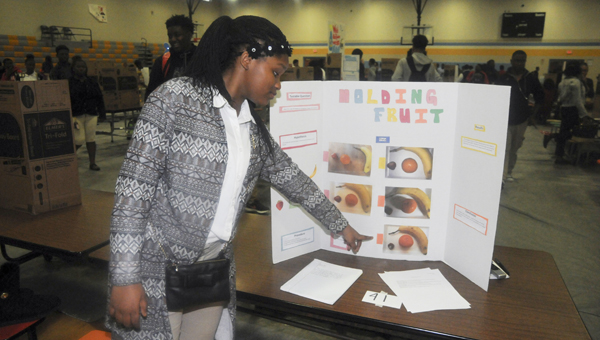 After about 10 years since the last Science, Technology, Engineering and Mathematics (STEM) Fair, the school’s National Society of Black Engineers decided to bring it back.

Kalimma Muhammad is president of the chapter and said she’s glad the chapter was able to do something fun and educational.

“I decided to bring it back and to give everybody else a treat and get them out of class for a little bit just to show them science is good,” Muhammad said.

She said she hopes the fair will encourage her fellow students to study science and do better in school.

Amber Holman looked for her water-purifying project to place in the fair. She said she got the idea after doing research on the Flint, Michigan water crisis and wanted to make sure people knew how to purify water in times of disaster.

“I saw how lead was in their drinking water and I thought I could show others how to make a filter and it can help them for future purposes,” Holman said.

She made a water filter system out of cotton balls, a two-liter soda bottle, a special type of rock and sand.

“There are different types of filtering methods. You can use an actual filter or you can make your own,” Holman said.

John Dubose said he had fun while doing his project. He used three different brands of trash bags to see which had the best quality.

“I held trash bags and placed bricks in them until they burst,” DuBose said. “The next time they go to the store to buy bags, they will know what to get. This was a very good experience.”

Biology teacher Ashlyn Goodwin said she was proud to see all of her students participating in the fair. Her entire class of 55 students submitted projects.

“Most of them had no idea what a science fair was until I started talking to them about it, but some of them have gone above and beyond my expectations,” Goodwin said. “Someone bought mice. I have students who have lights on their presentations with all types of props. They really got into it, and I’m so impressed.”

Winners are expected to be announced Thursday morning at Selma High. Look for a list in a future edition.

State budget could include Medicaid cuts